Since 1964, Arby’s has been serving up delicious sandwiches and soft drinks to the masses. While the brand initially only offered its signature roast beef sandwich, the brand has since come to include everything from pork belly to chicken and turkey. Known as America’s favorite fast food sandwich shop, Arby’s has a little something to offer everyone. From yummy mozzarella sticks to market fresh turkey sandwiches, this fast food chain is pretty different from the typical American fast food offerings.

Are you interested in finding an Arby’s in your area? Simply browse Arby’s near me and find the closest Arby’s location to you. Need a bit more information on this delicious fast food chain? Read on for facts, trivia, and a list of the top 3 Arby’s locations in the United States!

Arby’s Near Me – Find it on the Map

Arby’s Near Me – Arby’s Trivia

What state did Arby’s first open in?

If you’re searching Arby’s near me, then you might be considering the history of this storied fast food chain. Arby’s first opened in Boardman, Ohio on July 23, 1964 by Forrest and Leroy Raffel. The Raffel brothers wanted to create a fast food franchise based around a food other than hamburgers. While they initially wanted to name the restaurant Big Tex, the name was already being used by a local Akron business. 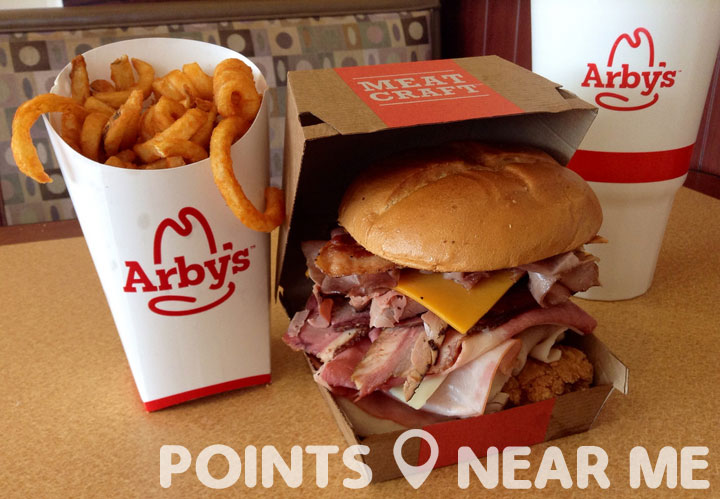 Arby’s now goes by the slogan “We have the meats!” This is pretty evident by the look of their new sandwich offerings.

What does the Arby’s name actually mean?

While many people have come to the conclusion that the name Arby’s is a play on the letter R and B for roast beef, the name has nothing to do with their classic take on sandwiches. Rather, the R and B stands for Raffel Brothers, a nod to the founders Leroy and Forrest. Even though they initially sought out Big Tex, despite not being located in Texas, Arby’s proved a more fitting and much more memorable name.

True or false: The original Arby’s menu was considered quite expensive for the time.

True! Odds are if you’re searching Arby’s near me right now, you’re a budget savvy diner. But when the brand first opened it’s doors, Arby’s had a limited menu and was considered to be bit expensive for the time period. While McDonald’s was selling hamburgers to hungry folks for just .15 cents, Arby’s roast beef sandwiches could set you back .69 cents. While this helped the chain carve out a place with a more adult and higher end crowd, it proved a hindrance when it came to reaching out to young folks and families. Arby’s has since lowered it’s prices to be on point with its competitors.

Sure, when one thinks of Hank Aaron, baseball comes to mind. But this Hall of Famer was more than just an ace on the ball field, he was also an ace businessman who purchased several Arby’s locations in the Milwaukee area, where he spent a majority of his baseball career. Aaron believed that customer needs should always come first and made sure that his franchises focused on providing service with a smile.

Arby’s Near Me – Arby’s Facts

If you’re searching Arby’s near me, healthy choices might not be on your brain, but believe it or not Arby’s can lay claim to the fact they were the first fast food company to make healthy changes and even offer a lite menu. In fact, Arby’s introduced its first lite menu in 1991, at a time when many fast food restaurants weren’t exactly focused on your waistline. The menu featured a series of salads all under 300 calories. In 1994, Arby’s became the first fast food restaurant to ban smoking in all of its locations, something that other restaurants did not do until much later in the decade.

Sure, the traditional roast beef sandwich will always hold a special place in the hearts of American diners, but in recent years the best selling sandwich at Arby’s has been the brisket sandwich. The smokehouse brisket offering which was first introduced in the fall of 2-14, quickly found success amongst hungry diners. The sandwich offered gouda cheese, crispy onions, and barbecue sauce. Since the introduction of the sandwich, sales climbed by 12%.

The Best Arby’s in America

If you find yourself in close proximity to one of the three highest rated Arby’s in the US, consider yourself lucky. You just hit the Arby’s jackpot.

This large location has a four star rating on Yelp due to their quick service, always hot food, and spacious dining area. Reviewers also remarked that this Arby’s is pretty on point and even offers some secret menu items.

Everything is bigger and better in Texas, even the Arby’s! While you might think that all Arby’s locations are treated equal, this Arby’s will prove once and for all that bigger is better and that customer service is best peppered with some good old Southern charm.