For those born in the 1980s and 1990s, the arcade is a place of nostalgia and good memories. From the dimly light coin operated machines to the action of skee ball, arcades will always hold a special place in the heart of most Americans and their children.

Are you interested in finding an arcade near you? You’re in luck! Simply browse arcades near me on the map below and find a list of arcades located within a close proximity to your current location. Need a bit more information on these coveted halls of fun? Read on for interesting facts, trivia, and history on the American arcade! You may just learn something new!

Arcades Near Me – Find it on the Map

Arcades Near Me – Arcades Trivia

Where are the roots of the American arcade traced back to?

While the American arcade may have reached peak popularity in the 1980s and 1990s, the roots of the arcade itself can be traced all the way back to dime museums, exposition midways, and the amusement parlors that were highly popular in the 19th century. As the 19th century came to a close, many parlor owners began to fill their establishment with new forms of novelties. Suddenly the industrial age ushered in phonographs, kinetoscopes, and mutoscopes; all were available for enjoyment at these early parlors. Parlors became magical places where one could go to listen to recorded sounds and watch moving images. It may seem archaic now, but these early parlors were fascinating and eye opening to the average American. As technology changed, so did these amusement parlors. With time, the novelty of these early inventions wore off and many amusement parlors were turned into penny arcades. With these repurposed spaces, the characters that filled the establishments also began to shift. Suddenly the crowds of refined men and women willing to pay as much as 25 or 50 cents to view films were replaced with workers, tourists, and young working class man. Arcade fans flocked en masse to try coin operated peep show machines, shooting galleries, slot machines, mechanical amusements. Many of these items could be used for as little as one penny. As you search arcades near me, consider the rich history behind this form of entertainment and how it grew with technological advancement. 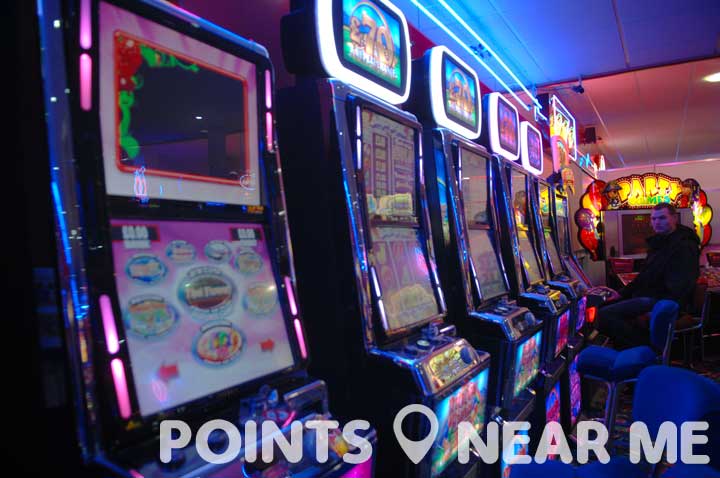 Arcades are still a great way to unwind and have a good time!

When was pinball introduced to arcades?

One can’t possibly write about arcades or search arcades near me without mentioning the influence and popularity of the pinball machine. What you may not know is when these machines were first introduced to early arcades. Pinball machines first appeared in the arcade in the 1930s. Soon pinball designers began to add flippers, bumpers, and artwork to suit the many themes promoted by various pinball machines. With these additions, pinball searched in popularity. So much so that many local government bodies began to ban the game as they associated the playing of pinball with gambling and even juvenile delinquency. Despite this, pinball surged in popularity, ruling arcades until the late 1960s when more sophisticated electronic machines were introduced to the arcade scene.

Arcades Near Me – Arcades Facts

The Surge of the Arcade

Arcades have always been popular in one form or another, but it was the introduction of video games that made for a massive surge in arcade popularity. By the time the early 1980s rolled around, video games were a true cultural phenomenon, finding fans in patrons young and old. With the advent of video games came the transformation of the arcade. Rather than featuring just pinball machines and strength tests, arcades were officially dubbed “video arcades.” These video arcades featured a bevy of fun video games both simple and more complex. By 1981, there were more than 24,000 fully functioning arcades in the United States, with thousands more non-arcade locations including restaurants, gas stations, and even dental offices offering a few arcade games for customers and patients. Soon enough, the market became a bit oversaturated. As home video consoles became more popular, anxieties over the relationship between arcades and juvenile delinquency lead to a steep decline in the number of arcades peppered throughout the US. By the end of the 20th century, numbers dwindled, with many arcades shuttering their doors for good. As you search arcades near me, think about the rise and fall of these fun establishments. Did the home console really ruin the fun of visiting an arcade?

If you’re searching arcades near me, rest assured, all is not lost when it comes to the hallowed halls of the arcade. While many stand alone arcades are becoming rarer and rarer, modern takes on the arcade are still very popular. Today, entertainment venues that offer food and arcade games such as Dave & Busters and Chuck E’ Cheese offer a place where families and adults can much on great food while playing the latest in redemption games. Vintage arcades also exist, as places like the American Classic Arcade Museum strive to keep the history of the arcade alive. Visitors of these museums can test their skills on a range of both classic and modern arcade & pinball machines. They may just be the greatest leap back in time you could take in the modern era!