Asian Market Near Me

If you’re looking for authentic Asian cooking ingredients, household items, and even skincare; an Asian market can prove a reliable source for all things Asia. Whether you’re whipping up your famous sesame chicken or simply looking for some unique Asian finds, a trip to the Asian market is always a great time.

Asian Market Near Me – Find it on the Map

What is sold in an Asian market?

If you’re searching Asian market near me, you’ll find that every Asian market has some similarities and some differences. Every Asian market you encounter will source from a multitude of nations, with the items in stock often differing based on the target ethnic market in that particular area. For example, in Chinese and Vietnamese style supermarkets, it is not uncommon to encounter dead animals hung on hooks for display. In Japanese supermarkets, this would be pretty taboo and out of line with tradition. Chinese supermarkets will often carry many Japanese products, but the range of selection is very limited compared to that of a traditional Japanese market. For example, there may be an entire aisle in a Japanese market just dedicated to Green tea. Some will stock a wide variety including loose leaf teas and pre-bagged teas. A Chinese market likely won’t have this large array of green teas, but instead will offer some traditional Japanese tea bags and flavorful bottled teas. Japanese markets are also diverse in that they often carry Hawaiian and Korean products. Likewise, most Korean supermarkets will carry a wide variety of Japanese goods. Filipino supermarkets tend to favor Filipino products and don’t often carry the variety of other Asian countries. 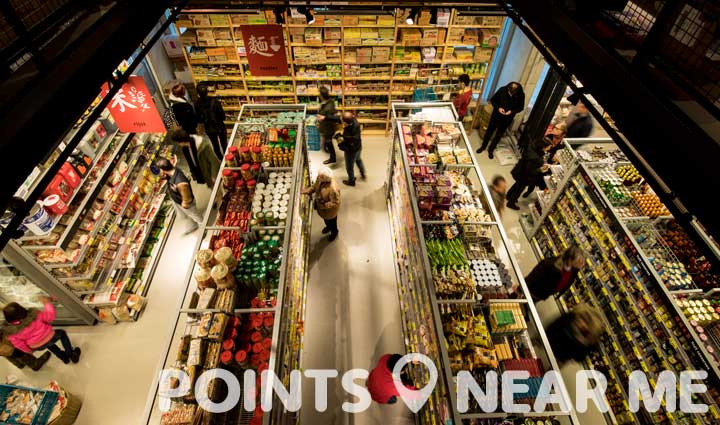 The Asian market game isn’t always cut and dry, but there are some simple truths. For the most part, Asian markets are run by Asian immigrant entrepreneurs and their families. Some are started by investors of existing conglomerates headquartered in Asia, specifically, Hong Kong, Japan, the Philippines, South Korea, and Taiwan. Asian supermarkets can range in size from Mom and pop grocery stores to large big box stores. They will often cater specifically to one ethnic Asian immigrant group or a widespread pan-Asian crowd. They generally serve immigrant and descendant populations. Overseas these markets are typically located in shopping malls and Chinatowns. In the United States they are often located in urban areas or suburban areas with large Asian populations. Typically these shops re-occupy older buildings that were formerly anchored by other mainstream and regional chains. Consider who’s running the Asian market in your area as you search Asian market near me.

A Wide Variety of Flavors

It shouldn’t come as a surprise if you’re searching Asian market near me, that Asian cooking boasts the widest array of flavors of any region in the world. For example, Chinese food alone boasts five key flavors that must always be balanced according to traditional Chinese medicine. The flavors are sweet, sour, salty, bitter, and spicy. Of course, flavors vary considerably all across China. Sichuan cuisine is famous for it’s mind numbing spiciness. Hong Kong cuisine is typically sweet or savory, Northern cuisine is salty, and majority of the southern cuisine is sour. The colder and drier northern regions of China tend to favor wheat production, so northerners are keen on dumplings, steamed buns, wheat noodles, and stuffed buns. In the southern region, Chinese eat bowls of rice or rice noodles with just about every meal. They also eat a greater variety of fruit and vegetables. They only occasionally eat wheat products due to production. Many are also shocked to find that some traditional markets will offer the true gamut of what authentic Asian cultures consume. It’s not uncommon to find kidneys, intestines, billed blood, insects, pig’s ears, and scorpions. What are you looking for as you search Asian markets near me?

Not only Asian markets and Asian cuisine centers on China or Japan, in fact there are many Asian markets that focus on Southeast Asian and Indian cuisine. South Asian cuisine typically includes the cuisines from the Indian subcontinent. Foods in this area are flavored with various types of chilis, black peppers, cloves, and other very strong herbs that can be flavored along with butter and ghee. Turmeric and cumin are also often used in this cuisine to make curries. Common meats offered here include lamb, goat, fish, and chicken. Beef is much less common in these cultures as cattle have a special role in Hinduism. They are quite popular in South India though, especially amongst Christians and Muslims. As you search Asian market near me, consider exactly what kind of Asian food you’re looking to find.