Are you looking to get all of your shopping done in one good trip? Do you enjoy buying months of toilet paper at one time? Well, BJ’s is a large and popular warehouse chain in the Eastern United States, sorry to all you west coast folks. If you are looking for one of these great stores, you will be able to check your BJS Map Near Me below. On the map, you will have any BJ’s location listed in your area. Just click on the location and it will tell you the address, phone number and hours of operation. You will also be able to get direction with a few clicks and also get links to reviews from customers and to the company website. After you are done checking out the map, you can continue reading to find information about the company and some fun facts and trivia.

BJS Near Me – Find it on the Map

BJS Near Me – BJS Trivia

BJ’s generally has a pretty consistent opening time between its various locations. So, consistency is good, but if you are looking for something open really early in the morning that you can go to before you start work, you may be in trouble. They don’t normally open until 9am. Their closing times are a bit less consistent. You will find they generally close anywhere between 9pm and 11pm, depending on the city. Sunday’s they have an early closing, which can be as early as 7pm. For holiday’s they will be either open reduced hours, usually the same as their Sunday schedule or closed. Holidays they normally close on are Thanksgiving, Christmas Day and some locations are closed on New Years Day. 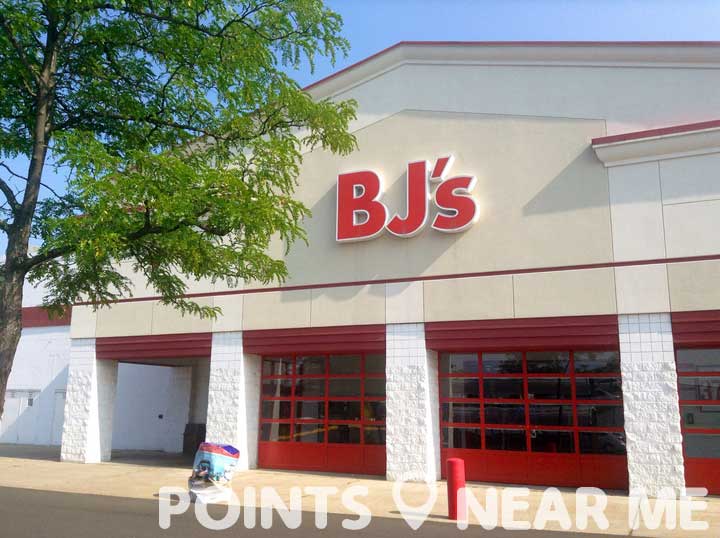 BJ’s Wholesale is a large wholesale club on the east coast of the United States.

BJ’s Wholesale Club is a membership only shopping location, so you don’t get to enjoy shopping at the stores without getting your membership card. There are generally 2 card choices that you can select from. You have the Inner Circle membership, which costs you $50 per year, but you have the option of adding friends and family members to your account for $30 each. So, if a few people go together, you can get it a bit cheaper. You can also often find discounted deals and get membership as low as $35 if you shop around a bit. The second choice is the BJ’s Perks Rewards which you get all of the basics, but for $100 per year, you get 2% back in store credit that you can spend. So, if you do most of your shopping at the store, you could make it worth your while to get the perks option.

So, why would you spend all of this money to purchase your goods at this company? Well, as they put it, savings. Their regular grocery’s are normally 25% less than a regular grocery store would sell the products at. For a family, those savings alone add up quickly. Their produce and deli always have fresh products for you to choose from. They also have exclusive brands, such as Wellsley Farms and Jensen brands. In addition to their low prices, they have a wide range of coupons that they accept to make your savings even more. Next, they have gas stations that will give you nice cheap gas to members. Finally, they offer a wide range of other services such as optical services for those who need new glasses or contacts.

BJ’s Wholesale Club has over 200 locations along the east coast of the United States in 15 different states. So, if you live along the east coast, you have a good chance of finding one of their locations when you search BJS Near Me. If you are further away, you may need to find another warehouse store, such as Costco.

BJS Near Me – BJS Facts

Are you ready for some fun facts and trivia about one of America’s most popular wholesale club?

Where does BJ’s Wholesale Club get it’s name?

Well, the wholesale club is pretty obvious. They are a wholesaler and the company requires a membership to shop there; however, the BJ is where you get the mystery. You see, the company used to be called Zayre and was a discount retailer; however, the corporation decided that it was a good idea to sell their store’s name to a competitor. Without a name, they switched to TJX Companies. The following year, the warehouse division of TJX was divided into 2 separate companies, one of them being BJ’s. BJ got its name from the initials of the daughter of the former president, Mervyn Weich, Beverly Jean. Eight years after BJ’s was created, it was released into independence.

How much food has BJ’s donated?

BJ’s Wholesale Club donates unsold fresh food to a network of 45 different food banks. It started the relationship back in 2011 to help give back to its communities. BJ’s wanted to help the 1 in 8 Americans who are at risk of going hungry. Since 2011, BJ’s has managed to donate over 50 million pounds of fresh food to the food banks. To celebrate, the company also donated $50,000 to the network of food banks.

How good is BJ’s gas stations?

If you go to a BJ’s Wholesale club. You are very likely to see that it has an associated gas station. About three quarters of BJ’s Wholesale Clubs have such a set up. Generally, you will find the the gas stations have comparable or even lower prices than most other local gas stations, but you will also be able to get 10 cents off per gallon with your membership card, which gives you a great incentive to go there for your gas when you are running a little bit low. So, when you are searching BJS Near Me if you need to top off your gas, you can get that done at the same time.

These two companies are rather similar in a lot of ways. They are both located in the United States and both require membership. They both sell groceries and have other similar services such as tires, gas and optometrist services. Overall, Costco is a much larger company, being the third largest company in the United States, while BJ’s is ranked 269 on Fortune 500’s company list. So, overall BJ’s Wholesale is significantly smaller.