Few things are as festive and fun as a local carnival or fair. From delicious food stands to fun rides and games, a carnival can be a great way to spend a night out with the family or even with a date.

Carnivals Near Me – Find it on the Map

Carnivals Near Me – Carnivals Trivia

True or false: Circuses were once considered carnivals.

True! Throughout much of the history of the 19th century, those living in rural America were totally enchanted by the entertainment and fun brought by traveling carnivals and local festivals. These shows often included vaudeville, circuses, burlesque, and magic lantern shows. Historians believe that the 1893 Chicago World’s Fair was the catalyst that initially brought about the idea of a modern traveling carnival. The Chicago World’s Fair included a an avenue that was located at the edge of the grounds called the Midway Plaisance. This avenue looks similar to what is now known as a midway at most carnivals. It included games of chance, freak shows, wild west shows, and burlesque shows. This avenue is also where someone would find the original Ferris Wheel which was constructed by George Washington Gale Ferris Jr. By 1902, there were seventeen traveling carnivals in the United States. By 1905, that number grew to forty-six and by 1937 there was an estimated 300 carnivals traveling throughout the country. Nowadays, carnivals are often used as fundraisers for churches, firehouses, and other community needs. As you search carnivals near me, consider the history of these traveling amusement shows. 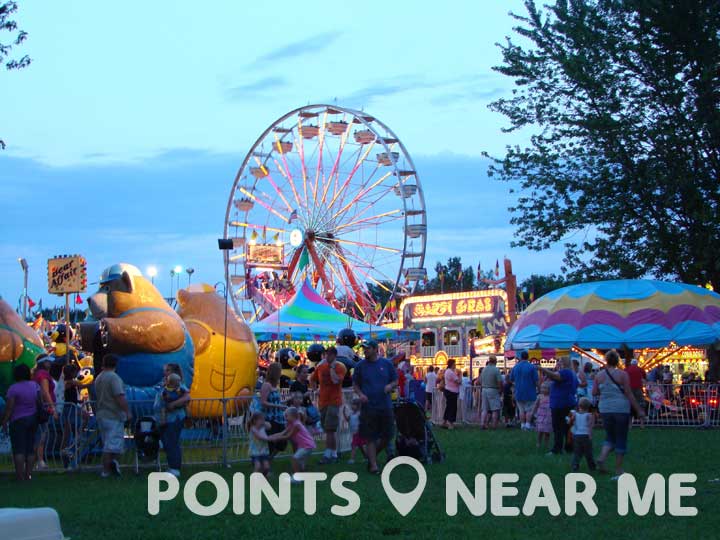 A traditional pop up carnival!

True or false: There are many different traveling carnival companies.

This is true! Carnivals are such a huge deal in the United States and abroad, that there are several dedicated companies that deal with just setting up and promoting carnivals. Many of these carnival operators are so huge that have to have carnival “units” or divisions. Each of these units and divisions typically consist of six or more major rides. By cutting the bulk of the work into units, a carnival operator can have a carnival operating in several areas all at the same time during the same week. Most rides and food stands are generally transported to the carnival grounds by truck. The rides typically have wheels which are mounted on the base and then the rest of the ride is dismantled and folded up to allow for over the road transport. Food stands are typically towed behind trailers, though there are some small booths that require operators to complete, take down, and pack. Some large carnival operators even use the railroad to transport equipment from one location to another. Most of these carnival operators only schedule their carnivals for certain seasons. Northern areas will typically only have carnivals in the summer and early autumn months.Consider these facts as you search carnivals near me.

Carnivals Near Me – Carnivals Facts

One of the best things about going to a carnival is the food! Few places offer the variety of food that is offered all in one place at a carnival. Depending on the size of the carnival, there can be anywhere from one food stand to dozens. Food stands can either be a part of the carnival company or locally operated by volunteers or food vendors. A variety of food and beverages are served up at the average carnival, including pizza, hamburgers, hot dogs, and fried chicken. One can also find, cheesesteaks, sausage sandwiches, and fries. Of course, there are also a bevy of snack foods to find at a carnival, some of which aren’t that great for the waistline. A typical carnival will have cotton candy, ice cream, fried dough, funnel cake, candy, caramel apples, and even waffle sandwiches. Beverages typically served at a carnival include soda, coffee, tea, lemonade, and orange aide. Depending on where you live, you may also find a lot of local or regional foods. For example, empanadas and tacos are often served up at fairs and carnivals in California and the southwest. Drinks like hot cider and hot chocolate can be found at autumnal carnivals alongside many harvest items. While you’re searching carnivals near me, consider what you might found at your local carnival!

The Best Games Around

If you’re searching carnivals near me, odds are you’ve played your fair share of carnival games. Most traveling carnivals include games of both chance and skill. Games like balloon and dots or crossbow shoot are found at virtually every carnival in the United States. You’ll also find games such as water gun, chance, and duck pond. If you’re in the market for a goldfish, you may want to try your hand at ping pong ball or fishbowl. Almost every game offers a small prize to the winner. Prizes can be everything from stuffed animals and toys to posters or framed photos of celebrities. Every player is encouraged to play as often as possible and trade in their small prizes for larger prizes. More difficult games that require some degree of skill such as baseball and basket will typically offer a large prize right off the bat.