Circle K Near Me

If it’s a one stop shop convenience store you’re looking for while on the road, Circle K has got you covered. With more than 8,000 locations throughout the US and abroad, there’s almost always a Circle K nearby no matter where you roam.

Are you interested in finding a Circle K location near you? Simply browse Circle K near me on the map below and find a list of Circle K locations located in a close proximity to your current location. Need a bit more information on Circle K? Read on for interesting facts, trivia, and more!

Circle K Near Me – Find it on the Map

What year was Circle K founded?

Given its broad influence and number of locations both in the US and abroad, it’s likely a given that Circle K goes way back. According to brand historians, entrepreneur and renowned risk taker, Fred Hervey began his journey with Circle K back in 1951 when he purchased a total of three Kay’s Food Stores in El Paso, Texas. Hervey quickly renamed the stores as “Circle K Food Stores” believing that it was a name that stuck with people and stood apart from the pack. He quickly grew the Circle K chain into the neighboring states of New Mexico and Arizona. Instead of the slow and steady method of growth that many chains relied on back in the 1950s and 1960s, Circle K grew in a slightly more aggressive fashion by relying on a series of acquisitions and takeovers, rather than simply building new storefronts. By 1975, Hervey boasted a total of 1,000 Circle K locations across the United States. By 1979, the brand was looking to expand abroad, when the first Circle K store was introduced in Japan. Circle K stores in Japan were being run by the Circle K Sunkus Corporation which was licensed under the Circle K Brand. By 1983, the number of stores increased from 1,000 to a whopping 2,180 with the acquisition and purchase of a 960 store UtoteM chain. As you search Circle K near me, consider just how swift growth really was for this chain its earliest years. 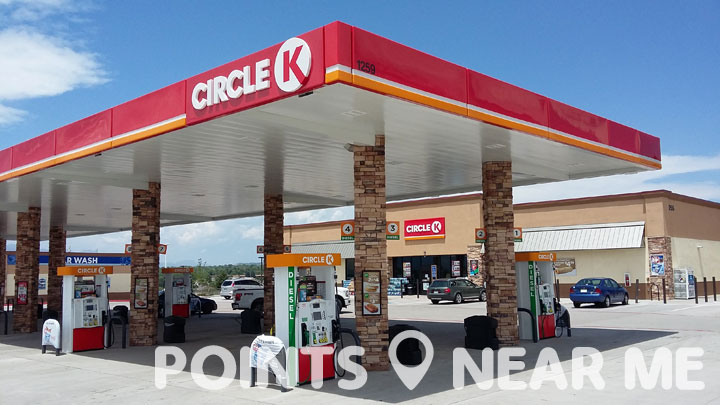 True or false: Since the 1980s, Circle K has been the largest company owned convenience store chain.

Circle K experienced massive growth spurts during the 1970s and 1980s. With smart decisions and acquisitions, as well as an entrance into the international market, Circle K quickly grew to become the largest company owned convenience store chain in the US. Circle K was only second in overall numbers of US stores to 7-Eleven. Though 7-Eleven has always been popular, it didn’t quite boast the small town charm that Circle K always has. Odds are, you’re searching Circle K near me for the convenience, comfort, and reliability that can be found within every Circle K locations.

A New Era with Tosco

After experiencing some financial difficulties in the early 1990s, Circle K needed a series of financial wins to help find its footing. That didn’t officially come until 1996, when Tosco Corporation, a Stamford Connecticut based petroleum refiner and marketer took the plunge and purchased Circle K for a whopping $750 million. To quickly advance the brand name, Tosco merged its marketing team, Tosco Marketing Company, with the Circle K Corporation to create the Circle K Company, which quickly became a division of Tosco with more than 4,000 retail locations in a total of 34 states. Not only did the merger help bring Circle K out of its financial slump, but it brought together one of the country’s largest oil companies with one of the largest convenience store chains. The results was rapid success for both. As the turn of the century approached, Circle K began another period of rapid growth and began to franchise Tosco Outlets. At this time, Circle K also began to experiment with an at home meal replacement store known as Emily’s Market. Emily’s Market meals were also to be introduced to Circle K locations as well. Many Circle K locations also began testing the concept of in store Blimpie and Taco Bell franchises. Odds are, if you’re searching Circle K near me, you’ll find a Circle K that offers an in house restaurant or a pre made foods counter.

Anyone searching Circle K near me, likely wouldn’t mind saving a dime or two while visiting their nearest location. So how does one save money at a convenience store such as Circle K? For the most part, the only way to earn store coupons and discounts is by becoming a Circle K rewards member. By becoming a Circle K rewards member, you can earn 10 rewards points per gallon of gas and 20 rewards points per dollar. These rewards points quickly add up into a dollar amount off of your total purchase. As a member, you can also receive exclusive rewards, info on upcoming promotions, and discounts on things you buy most often such as coffee or snack items. You can sign up for a Circle K rewards membership online, in store, or via the brands app. App customers can easily keep track of points and find out quickly just how far they have to go until their next reward.