No one likes pockets of heavy coins. They are loud, bulky and just plain uncomfortable and annoying to carry around. If you are like many Americans, you just toss them in a jar, box or drawer and let them pile up until you can’t take it anymore. Now you are looking to unload them at a Coinstar vending machine to avoid rolling them and taking them to the bank.

Well, check out your Coinstar Near Me Map below. It will show you all of the locations in your area where you can unload that burdensome weight and get the coins made into a much more easily used form of currency. Just select a location and it will give you the name of the store it is in, the address and a link to the company website. After you are done, you can check out some more information about the Coinstar services below and some interesting facts and trivia about coins.

Coinstar Near Me – Find it on the Map

Coinstar Near Me – Coinstar Trivia

Coinstar is classified as a money transfer and exchange company. You mainly have 2 major things that the company works with, coins and gift cards.

The coin services that Coinstar offers is the changing in a large number of unmixed and rolled coins and exchanging them for either gift cards or money vouchers. Once you take the coins to the vending machine, you can select from a number of options including cash, gift card or charity. Once you have made your selection for the type of exchange you would like to make with your coins, you are asked to make sure the coins are clean and to remove an garbage or non-cash items such as buttons that may be mixed in with them. After you have just the coins isolated and clean, you pour them into the slot to be counted up. Depending on your selection prior, you will have a number of different options. 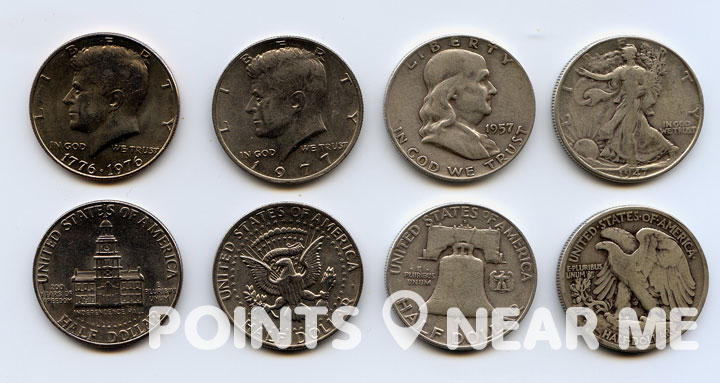 American 50 cent coins became obsolute back in the 1970s but are still considered legal tender.

If you selected to get cash for your coins, you will be issued a cash voucher. For this service, you are normally charged a service for of 10.99%. So, if you deposited an impressive $1000 in coins, you would $109.90 for the services. Sure, for most people you wont be exchanging that much, but it is just an example. In this example you would get a voucher for $890.10. You would then take the voucher to the customer service or checkout for the store your Coinstar Vending machine is in and they would give you the money back in bills.

In option 2, you select the gift card. Here, you have gift cards for various stores, depending on where your Coinstar Vending machine is in; however, the company has deals with over 150 different stores, so you are bound to find something you like. In this case, there is no service fee, but you are limited to spending the money in the store you have selected. After the coins are counted, you get a nice printed ecard with a barcode to use it. So, it is time to go shopping.

The final option is to donate the money to charity. Coinstar has deals with 7 different charities including: American Red Cross, Children’s Miracle Network Hospitals, Feeding America, The Humane Society of the United States, Leukemia & Lymphoma Society, UNICEF and the World Wildlife Federation. You just select which charity you would like to donate your coins to and you get a receipt for tax purposes. There is also no service charge for donating the coins. Next time you are looking for a vending machine with Coinstar Near Me, maybe consider donating the coins to charity.

Okay, maybe you got a gift card that you didn’t like. Well, Coinstar also accepts those as well. All you have to do is bring the gift card, of more than $20 to a vending machine. If it is from one of the more than 150 companies the company deals with, the machine will give you an offer on the card and you can accept it. You will get a similar cash voucher that you would for coins that you can take to the customer service or cash register of the store you are in and get your money. You will need some kind of ID to use to avoid fraud with the gift cards.

Coinstar Near Me – Coinstar Facts

Have you ever just stopped and wondered about all the things that we use our coins for and do with our coins. Well, lets get started.

1. Of all the large number coins that we use to put in the Coinstar machines, which coin gets added the most?

Well, according to Coinstar, the people put in way more pennies than any other coin. Actually for people’s first visit, it seems that they use a large number of pennies that are mostly from before 1982. After that, the number of pennies start to decrease over time. I guess you can use other coins for various vending machines but there isn’t much use for the penny, besides tossing them in wishing wells and now Coinstar machines.

2. Which of the following was the smallest denomination used on American currency? Quarter Cent, Half Cent or One Cent.

If you guessed the Half Cent, you would be correct. Between 1793 and 1857 the United States minted a half cent coins. It was made out of pure copper and had several different designs over the years.

If you guessed False, you are correct. The first time “In God We Trust” was added to U.S. currency was in 1864. In 1795, the Liberty Cap-Heraldic Eagle gold $5 piece actually had the original United States Motto “E Pluribus Unum”, which stands for “One from Many.”

4. How long does the average coin last in circulation?

Many things can happen to a coin while it is being circulated. It may get worn down with use or through events like being stepped on or run over. Coins get lost or they get transferred into various currencies. They get dirty and some just end up in jars and piggy banks. Overall, coins get used and passed around and eventually need to be melted down and recast. According to the U.S. Mint, the average life expectancy for a freshly minted coin is about 30 years, which is 20 times that of its paper counterpart.

5. What is the largest coin made in U.S. currency?

If you guessed the $1 coin, you would be partially right. In the United States, the most common coins are the 1 – cent, 5 – cent, 10 – cent, and 25 – cent coins; however, up until 1978 you could also find 50 – cent coins and you also find the occasional special dollar coins that are made, mostly for commemorative purposes. But, these are not the largest coins minted. The mint does produce legal tender (money) called bullions, which it started making in 1986, that are made from silver, gold and platinum. These have a legal tender value of up to $100, but considering the material and the rarity, the face value and the actual value are not necessarily the same.

So, if you are placing your coins in a Coinstar vending machine after searching Coinstar Near Me, please be sure not to add coins with a value larger than 25 cents, as those are rather uncommon and probably worth more than the face value on them.