In recent years, health conscious individuals and those looking for different kind of frozen treat have taken to froyo rather than soft serve ice cream. Frozen yogurt is a type of dessert made with yogurt and sometimes other dairy products. It is often a bit more tart than ice cream and is lower in fat. Most frozen yogurt shops offer a self serve format which also allows you to choose your own toppings.

Are you interested in finding froyo near you? Simply browse froyo near me on the map below and find a list of frozen yogurt shops located within a close proximity to your current location. Need a bit more information on froyo? Read on for interesting facts, trivia, and more!

Froyo Near Me – Find it on the Map

Froyo Near Me – Froyo Trivia

True or false: Yogurt was first brought to the US in the early 1900s.

History shows that people have been enjoying the taste and benefits of plain yogurt for over four millennia, especially in countries of the Middle East and India. Though a popular treat in these countries for a long time, yogurt wasn’t brought to the US until the early 1900s. From there, it steadily increased in popularity, quickly being dubbed a health food item. By the 1930s, Dannon began to sell pre-packaged yogurt in grocery stores. This gave even the average citizen access to yogurt, which only helped the industry to boom. By the 1970s, with the popularity of ice cream surging more than ever, freezing and production technology was tested on yogurt and with that frozen yogurt was born. Despite offering the same cooling benefits and texture as ice cream, many complained about the yogurt taste. Yogurt tends to be more tart than ice cream and less sugary, giving it a different flavor profile. In an attempt to capitalize on the demand for a sweet product that tasted like ice cream but was healthier and less sugary, TCBY opened in 1981. Unlike other pre-packaged versions of frozen yogurt, TCBY offered soft served dispensed at the point of sale through a machine. They quickly became the largest frozen yogurt franchise in the world, finally popularizing frozen yogurt and perfecting the taste. Others saw the success of TCBY and soon frozen yogurt was trendier than ever. Sales reached $25 million by 1986 as brands such as Colombo, Naci’s and Miss Karen’s entered the frozen yogurt game. By the mid 1990s, more than 10% of the frozen dessert market was held by froyo. Unfortunately demand slowed in the late 1990s as many Americans turned to high protein, high fat diets. Froyo fell out of favor only to make a comeback later in the new millennium. As you search froyo near me, consider just how far frozen yogurt has come since it’s early inception. Do you think froyo will continue to grow in popularity? 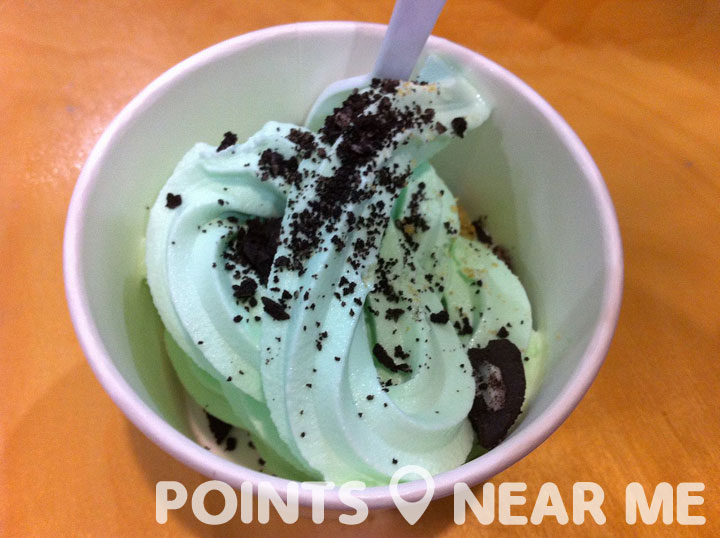 A typical frozen yogurt at Menchies!

Froyo Near Me – Froyo Facts

Many would be weary to call frozen yogurt’s rise in popularity a comeback, but that’s exactly what it is. Consider these facts as you search froyo near me. As the 1990s came to a close, individuals were no longer seeking low fat diets. Instead, they wanted high fat ice cream that was affordable and tasty. This fall in health consciousness ultimately lead to a rapid decline in froyo sales until around 2007 and on. By 2012, sales of frozen yogurt were at a high, earning more than $194.9 million in sales. More than 121 million servings of frozen yogurt were sold in 2012, decimating the peak sales in 1986 which were around $25 million. Frozen yogurt is now so popular that competition is stiff in the market. Though TCBY ruled the roost for decades, it’s no longer number one, despite many attempts to rebrand itself through decor and updated machines. As of 2015, the leader in frozen yogurt is the California based Menchie’s which currently owns 13.5 percent of the market and is operating 300 US locations. Considering that the brand was only discovered in 2010, we’d say that Menchie’s rise was somewhat meteoric. TCBY trails behind Menchies with only 10.8 percent of the market, despite its 518 locations. Yogurtland, SweetFrog, Red Mango, and Pink Berry are other notable froyo brands that you’ll likely encounter during your quest for frozen yogurt.

If you’re searching froyo near me and love frozen yogurt, then you’ll likely want to get in on all of the festivities of National Frozen Yogurt Month. That’s right, as of 1993, June was officially established as National Frozen Yogurt Month in the United States. National Ice Cream Month follows suit in July. There is also a National Frozen Yogurt Day, which strangely enough falls right in the middle of winter on February 6. Many yogurt shops embrace both frozen yogurt month and frozen yogurt ay by offering free froyo, discounts, and even coupons for a certain amount off of your total order. If you’re frequenting a larger chain, make sure you sign up for any emails or rewards programs. Typically, any and all coupons or savings will be sent to one of those accounts.