In-N-Out Burger is an American chain of fast food restaurants. Most of their locations are in the Southwest, and along the Pacific coast. The business was founded by Harry and Esther Snyder, a married couple from Baldwin Park, California, in 1948, and today is owned by their granddaughter Lynsi Snyder. The business currently has about three hundred locations in half a dozen different states, and plans for future expansion into other parts of America.

The headquarters are currently located in University Tower in Irvine, California, about forty miles from the site of the first In-N-Out. To find the closest In-N-Out Burger restaurant to you, search for “In-N-Out near me”!

In-N-Out Near Me – Find it on the Map

In-N-Out Near Me – In-N-Out Trivia

How big is In-N-Out Burger?

In-N-Out Burger is a relatively small restaurant chain, consisting of 313 locations. It serves California, Arizona, Nevada, Utah, Texas and Oregon. There are also distribution centers in Texas, California, Utah and Arizona, to allow for future expansion to other states. The company earns approximately $580 million in revenue each year. The company has resisted opening franchises, or becoming a publicly listed company. It believes that to do so would risk reducing quality or customer satisfaction in exchange for excessive business growth. The company is well known for employee-centered business practices. For example, it is one of a few American fast food chains to pay its employees more than state and federal minimum wages. The average hourly wage for employees is around $10 per hour, compared to the national average for fast wood work of around $8.90. Employees can even make as much as $14-15 per hour. 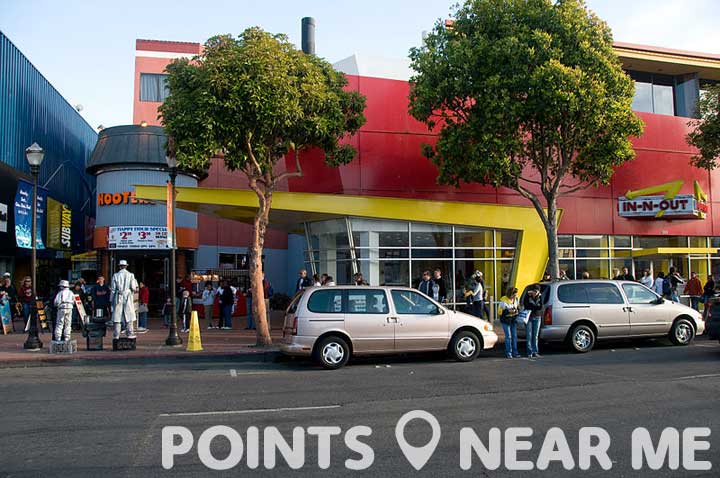 In-N-Out locations all feature a simple color scheme of red, white and yellow, from the exterior colors to the interior design and even the employee uniforms.

How did In-N-Out Burger begin?

In 1948, Harry and Esther Snyder opened a hamburger location in Baldwin Park, a suburb of Los Angeles, at what is now the intersection of Francisquito Avenue and Interstate 10. It was the first drive-through hamburger stand in California. It featured a two way speaker system for customers to place orders, which was very unusual at the time. It was much more common for restaurant employees to approach customer cars and physically take their orders. A second location was opened in 1951 at the corner of Grand Avenue and Arrow Highway in Covina, California. They grew slowly at first, with the Snyders personally managing every restaurant very closely for quality. By the time Harry Snyder died in 1976 at age 63, there were eighteen locations. After Harry’s death, his son Rich Snyder became company president. Along with his brother Guy, Rich led the company into a period of rapid growth, opening 75 new locations within twenty years. The first location outside of Los Angeles opened in San Diego Country in 1990. This was the 61st location overall. In 1992, the company finally expanded beyond California, with a restaurant opening in Las Vegas. After the opening of the 83rd location, in Fresno, California, Rich Snyder and four other passengers were killed in a plane crash. Guy Snyder took over the presidency, and continued the rapid expansion. In the six years he was president, the company expanded from 83 to 140 locations. Guy died in 1999 after overdosing on painkillers. Esther Snyder then took over presidency. She remained president until her death in 2006 at age 86. Former vice president Mark Taylor took over from her. In 2010, the current president Lynsi Snyder assumed the role.

To find your local In-N-Out, just search for “In-N-Out near me”.

In 2007, the company opened its first location in Tucson, Arizona. This store’s opening broke company records for the most burgers sold in one day, and also in one week.

When the company expanded into Oregon, it opened its first store in Medford, on September 9th. This date is also Harry Snyder’s birthday.

Lynsi Snyder, current president, is the daughter of former president Guy Snyder. Mark Taylor, the fifth president, is so far the only person outside the Snyder family to have been president. Lynsi has stated that she intends to pass the company to her two children in the future. Lynsi owns the company through a trust, and most business decisions are made by a team of seven company executives.

The In-N-Out menu is fairly simple. There are three burger varieties available: a hamburger, cheeseburger, and the “Double-Double”, which consists of two hamburger patties and two slices of cheese. They also sell french fries and sodas, and three milkshake flavors. Hamburgers come with lettuce and tomato, and the customer is asked whether they would like to have onions, which can be fresh or grilled. They also offer a variant on Thousand Island dressing as a sauce.

In addition to these items, the company also maintains a secret menu. This includes a “3×3” and a “4×4” (similar to the “Double-Double”, but with three or four patties and cheese slices), grilled cheese sandwiches, “Protein Style” and “Animal Style” burgers, and Neapolitan ice cream milkshakes. The “Protein Style “ is a wrap with lettuce and all the hamburger ingredients except the buns. The “Animal Style” fries come with melted cheese, Thousand Island dressing and grilled onions on top. The “Animal Style” burgers are cooked in a thin mustard layer, and also include pickles, grilled onions and extra dressing. Chili peppers, sliced or whole, can also be requested. There is also a “Flying Dutchman”, which consists of just two meat patties and two cheese slices, with no bun or vegetables.

Until 2004, the restaurants allowed burgers to be extended past “4×4” by allowing any number of extra patties and cheeses, at extra cost. In 2004, a customer tried to order a 100×100 burger, and since then the management has placed a limit of four.

Search for “In-N-Out near me” to locate your nearest restaurant!