A mall is a collection of different stores in a particular location. Malls are typically one of two types. The first is a shopping mall, which is a large building containing stores, with walkways forming roads to each store. This type will often be multiple storeys, and will have escalators, elevators or stairs connecting the walkways of different floors together. The malls will usually have their own parking spaces or structures, and may be served by public transportation as well.

The second type of mall is a strip mall. Strip malls are a strip of shops along the side of a road, and attached to a sidewalk. These stores tend to be single-storey, and may or may not have their own parking bays. To find a mall near you, you can simply search for “mall near me”.

Mall Near Me – Find it on the Map

Mall Near Me – Mall Trivia

Are there different sorts of malls?

The International Council of Shopping Centers has defined eight categories for shopping malls. ‘Neighborhood centers’ are usually arranged as strip malls, and mostly have supermarkets or drugstores as the anchors. They are usually small, and tend to only serve the local neighborhood. ‘Community malls’ serve multiple neighbourhoods, and usually feature two anchor stores. ‘Regional centers’ have two or more anchors, and tend to have higher-end stores than the smaller types of malls. ‘Super-regional centers’ must be over 800 thousand square feet, have three or more anchors, and be the dominant center within 25 miles. A ‘fashion center’, or ‘specialty center’, is a mall that features only clothing shops and boutiques. These tend to be high-end apparel stores. A ‘power center’ is a center that features almost exclusively ‘big box’ stores. A ‘theme center’ or ‘festival center’ is a mall set up in a tourist destination, and usually all of the stores share a common theme. The final type of mall is an ‘outlet center’. These are places where manufacturers sell directly to consumers. Other stores in outlet malls are operated by retailers, and will sell returned or discontinued products of those manufacturers, usually at heavily reduced prices. 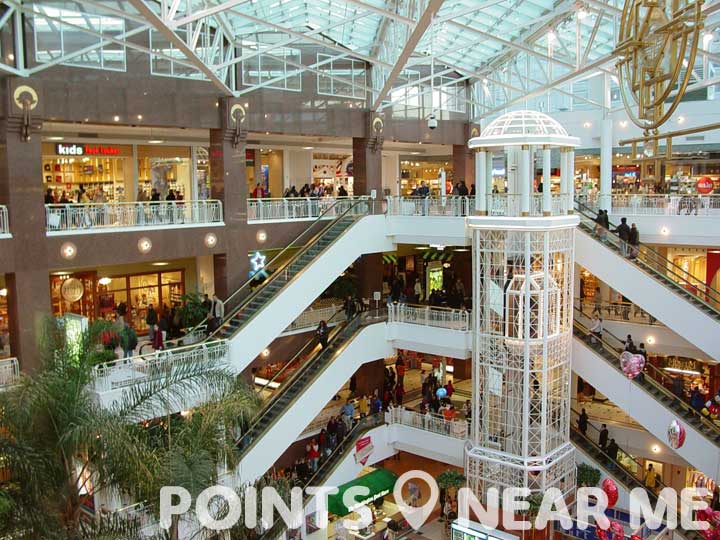 One of the US City Malls in Pentagon City.

Are there malls in other countries?

Every country in the world has large shopping centers, however terminology does differ around the world. In Australia, for example, the term ‘mall’ tends not be used, and the term ‘shopping centre’ is used to refer to both strip malls and regular shopping malls. In Britain, it is common for shops to be arranged into ‘arcades’, which are narrow pedestrian streets with stores on either side. In North America and countries around the Middle East and India, the term ‘shopping mall’ refers to an enclosed building containing stores, while ‘shopping centre’ means an open-air retail complex. In these countries, the stores tend to be car-centric, with large parking lots and connections to main roads, and tend not to have many pedestrian connections.

What types of shops are usually found in malls?

Most malls contain one or more anchor stores. These stores are the largest, and belong to major brands, usually supermarkets. The customers that these brands attract will tend to visit the surrounding stores too, and thus the smaller businesses are aided by the larger. Malls might contain smaller grocery stores, hair salons, book shops, toy stores and banks. Depending on the size, a mall might contain a café or two, or a large food court with many restaurants and food servers.

To find the malls closest to you, just search for “mall near me”.

Mall Near Me – Mall Facts

The world’s largest mall is the New South China Mall, in Dongguan, China. The mall has a total floor space of 9.6 million square feet of leasable area, which is larger than the Pentagon, and almost double the area of Vatican City!

The largest mall by total area, however, is The Dubai Mall, in Dubai, United Arab Emirates. This mall has 1200 shops in total, and in 2011 was the world’s most visited building, with over 54 million visitors! The total area is 13 million square feet, but only 3.77 million square feet of total leasable area.

The Mall of America, near the Twin Cities in Minnesota, claims to be the most visited mall in the world. It is also the largest mall in the United States. The mall also has its own zip code!

According to a 2013 edition in the New York Times, there are 685 super-regional malls in the United States, and over 65 thousand strip malls altogether.

In malls that contain multiple large anchor stores, the floor plans are usually designed so that these large stores are at opposite ends to each other. This encourages customers who want to visit both to walk past all of the smaller stores to do so, thus increasing business for those as well. Some other tricks include minimising the number of windows, so customers cannot easily tell how much time they have spent in the mall; and including turns and corners, so the distance to other shops seems smaller.

The Villaggio Mall in Doha, Qatar, is themed like the Italian city of Venice, and even has a nearly 500 foot long canal, complete with gondolas! The mall also contains the Gondolania Theme Park, which has one of two ice hockey rinks in Qatar. The park is an indoor theme park, and also contains a ten pin bowling center and a rollercoaster!

Melbourne Central Shopping Centre, in Australia, has an interesting feature inside. On the site it now occupies, was a small 19th century ‘shot tower’, inside of which molten lead was dropped. The air formed the lead into shot, used in early firearms. When the shopping center was being developed in the 1980s, the shot tower could not be demolished because it was a heritage site, and so the mall was simply constructed around it, with a large glass dome extending above the mall to encompass the shot tower’s height. Melbourne Central is also famous for being one of the locations of the 1997 Jackie Chan film Mr Nice Guy.

Melbourne also has another claim to fame. The largest shopping center in the southern hemisphere is Chadstone Shopping Center. This mall has 1.8 million square feet of retail space, with over 530 stores. The mall contains two food courts and two office towers, and the owners have planned to include a 180 room hotel in the future!

You can find all of the malls near your area, just by searching “mall near me”.