When you’re in the mood for some delicious baked goods, where else do you head than Panera? This chain has been around for quite some time and they have grown in popularity that it’s basically impossible to not find a store near you. They don’t just offer baked goods but a whole variety of delicious products.

If you’re interested in trying out Panera for the first time or maybe you moved somewhere new and you can’t find any near you, it’s rather easy to find a location. Just search Panera near me to find the nearest location.

Panera Near Me – Find it on the Map

Panera Near Me – Panera Trivia

What was Panera called before?

This popular chain wasn’t always called by its name of Panera. The founders of the company first started Au Bon Pain and in turn they bought Saint Louis Bread Company which only had about twenty stores at the time. They bought the store with the intention of growing it outside the St. Louis area under the name Panera and grow it did. It eventually grew too much and the owners sold their Au Bon Pain franchise so they could focus solely on Panera. While the majority of the stores are called Panera Bread, there are a few still by their original name. In the St. Louis area, which is where the company is headquartered, some Panera stores retain the original name of the Saint Louis Bread Company. 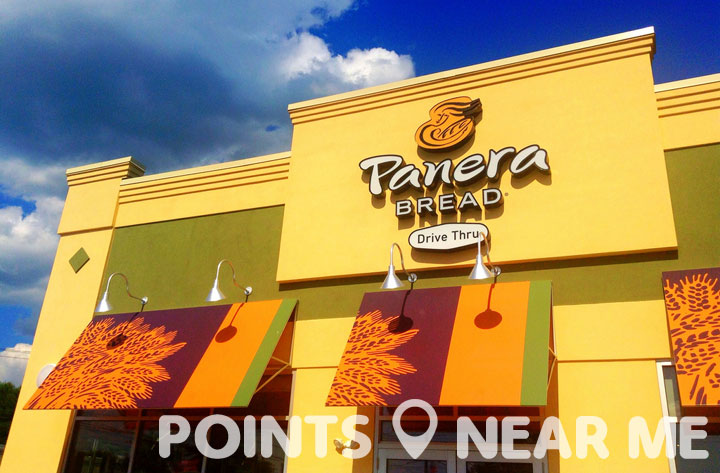 Do you have a Panera by you?

The Panera company actually owns a chain of bakery-cafes in Utah, Arizona, Colorado, Nebraska, Texas and Illinois called the Paradise Bakery so you may be eating at Panera without even realizing it.

What does the company really love?

One thing that Panera loves is their freshly baked bread. They have their company mission of “A loaf of bread in every arm” so they aim to make the best bread that they can. Fresh dough is delivered daily to every franchise from twenty-three facilities across the country via 212 delivery trucks. Panera actually sells a ton of bread to their customers yearly. It’s estimated that Panera sells about 150 million loaves of bread and 240 million bagels annually. That means it takes about 140 million pounds of flour to make all that dough each year. If you’re interested in trying out their freshly baked bread, just search Panera near me to head to your nearest location to try it out.

Why do some of their cafes not have prices?

Panera actually opened their first Panera Cares Community Cafes in Clayton, Mo. in 2010. This cafe actually operates on a pay-what-you-can system unlike the other cafes. The menu is actually listed with suggested donations and the company estimates that sixty percent of the customers end up paying. These locations usually end up bringing in about seventy to seventy-five percent of what a cafe with strict prices would make.

Panera Near Me – Panera Facts

Did you know the word Panera sort of means bread bowl? The Spanish word translates to bread basket or bread box so it just depends on how you decide to interpret it. When you think about what the chain is popular for, it kind of makes sense what the word can mean.

While Panera has grown rapidly since they first opened, you actually can’t find one in every state just yet. If you’re living in Montana or Wyoming, you’ll have to travel quite far to enjoy some of this chain’s freshly baked bread. Besides not being in these states, Panera has more than 2,000 locations across America. Just in 2009 alone, the store expanded by more than thirty percent which means a new location was unveiled almost every five days.

This chain was actually the first national chain to list calorie counts. They did it before any other restaurant and soon the calories were appearing on the menu. In 2005, they also removed all artificial trans fats from the menu and has sworn to completely artificial ingredients which includes colors, flavors, sweeteners and preservatives from all its ingredients by 2017.

They make sure those extra baked good don’t go to waste! Whatever doesn’t get sold by the end of the day will all be donated to charity. Items will only sit on shelves in-store for a single day. They donate any remaining breads, bagels, muffins and pastries to the Day-End Dough-Nation program to help community hunger relief organizations. In 2014 alone, Panera donated about $100 million worth of bread and baked good nationally. If you’re interested in trying out their baked good, just search Panera near me to find your nearest locations.

While some stores may have hidden menus that the employees may not know about, there is a secret menu at Panera that all the staff know about. It’s a relatively healthy menu where you can make better choices for your meals than loading up on tons of carbs. You can order some high-protein meals like a Power Breakfast Egg White Bowl or a Power Steak Lettuce Wrap.