Payday Loans Near Me

A payday loan is a relatively small amount of money lent at a high rate of interest based up the agreement between two parties that the amount will be repaid when the borrower receives their next paycheck. Often for many Americans living from paycheck to paycheck, it can seem like the only suitable option to get buy until the next round of funds comes in.

Payday Loans Near Me – Find it on the Map

True or false: In the US 12 million people borrow $50 billion a year through payday loans.

This fact is true! In the US alone, it is believed that 12 million people borrow nearly $50 billion a year through payday loans in order to make ends meet in between paychecks. While for many individuals this is the only option, some lenders aren’t exactly fair to their customers. The rates charged on payday loans can be up to 35 times those charged on credit card loans and 80 times the rates charged on home mortgages and auto loans. While payday loans may often be the only option, some lenders make them the worst option. Consider this the next time you search payday loans near me. 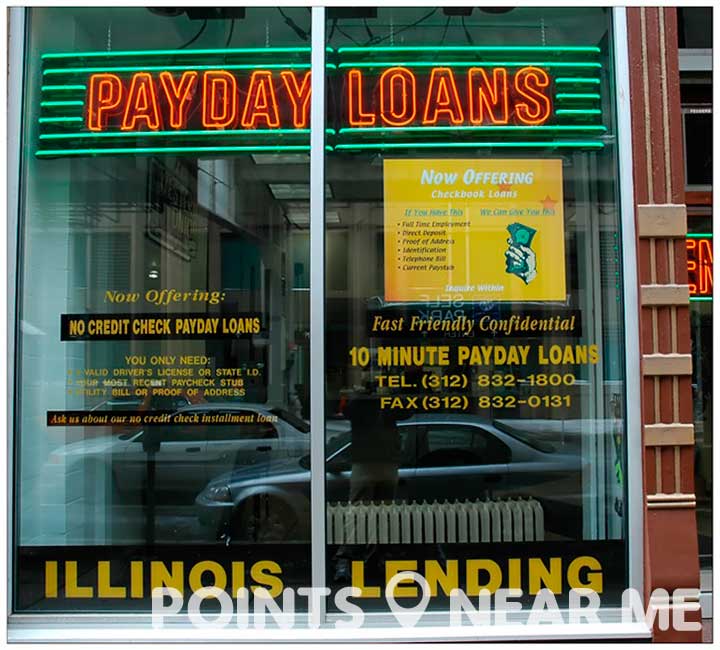 You can typically procure a payday loan from many check cashing venues or even convenience stores.

What are the requirements to get a payday loan?

Like any loan, payday loans require a few things in order to actually obtain the loan. Before searching payday loans near me, make sure you meet the basic requirements. All a consumer truly needs to get a payday loan is an open and functioning bank account that is in relatively good standing, a steady source of income, and a government or state issued ID. Lenders issuing a payday loan will not typically conduct a full credit check or ask questions to determine if a borrower can afford to repay the loan. While this may be great in the short term, it can often cause financial difficulties for those who can’t actually afford to pay back the loan in the amount of time agreed upon.

Like most loans, Payday loans range in size from $100 to $1,000 depending on your specific state and the legal maximums they have set forth. The average loan term for a payday loan is about two weeks (this is typically the amount of time it will take the average American to receive their next paycheck. Loans typically cost a rate of 400% annual interest or even more (depending on the terms of the agreement). Finance charges range from $15 to $30 to borrow $100. For two week loans, finance charges can result in sky high interest rates ranging from 390 to 780% APR. Shorter term loans will carry even higher APRS. Think about what you really need and want while searching payday loans near me so that you can enter this agreement well informed.

One question you might have on your mind while searching payday loans near me is, “Are they legal?” High cost payday lending is authorized and legal by state laws or regulations in a total of thirty two states. Eighteen states, including the District of Columbia are looking to protect borrowers with reasonable small loan rate caps. Meaning you likely won’t get taken advantage of. The Arkansas Supreme Court ruled that the Arkansas payday loan law was unconstitutional. However in recent years, states such as Oregon, New Hampshire, Arizona, and Montana have reimposed rate caps to protect borrowers and put an end to the lender squeeze.

While searching payday loans near me consider these few facts. The average payday loan borrower is in debt for around five months of the year, after spending $520 in fees to repeatedly borrow $375. The average fee for a storefront loan business is around $55 every two weeks. Payday loans are almost always due in two weeks from the borrow date and are alwys tied to teh borrowers exact pay cycle. Payday lenders have direct access to a borrower’s checking account on payday electronically and can collect from your income before other lenders or bills are even paid. This can often lead to a sticky situation on the part of the borrower. When looking for a good payday loan, do your research and try to find a reputable lender. Make sure you are clear on your terms and duties.