Payless ShoeSource is an American footwear retail chain. It was founded in the 1950s in Kansas by two cousins. The store specializes in cheaper and discount shoes and other footwear. Early marketing techniques used by the business centered on the idea of cheap shoes. The business has acquired many other footwear retailers in America and in several other countries, which has helped its growth and expansion. While it was formerly a publicly traded company, Payless is now a private organization.

Today the business has over four thousand locations across the globe, and employs about 25 thousand people to staff those stores. For your closest Payless store, just search for “Payless near me”.

Payless Near Me – Find it on the Map

Payless Near Me – Payless Trivia

How did Payless ShoeSource begin?

In 1956, cousins Louis and Shaol Pozez founded a shoe store called Pay-Less National, in Topeka, Kansas. Their vision was for a self-service store that sold budget footwear. By the early 1960s, the company had changed its name to Volume Shoe Corporation, and became a publicly listed business. In 1971 and 1972, the business purchased the Kansas City, Missouri based Hill Brothers Shoe Company. They began to operate these stores under the Payless brand. By 1972, Payless began to operate other stores under this name, as well, and by 1978 the majority of stores bore the name. In 1979 the company was acquired by the May Department Store Company, who eventually sold the company back to shareholders in 1996. In 1991 the company was renamed to its current title, Payless ShoeSource. In 1999 the company began to trade online and established a website. 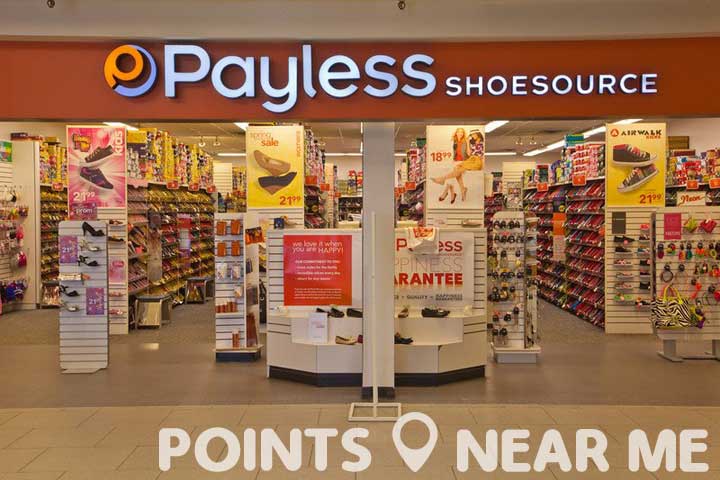 This is the Payless store in Bentley Mall, Fairbanks, Alaska, just one of thousands of stores across America.

How large is Payless ShoeSource?

Today the company operates just under 4500 stores, in over a dozen different countries. Payless ShoeSource has a revenue of approximately $3 billion, and a net income of $97 million. It employs about 25 thousand staff to run its locations around the world. In Australia, Payless ShoeSource bought out 150 shoe stores, formerly belonging to Payless Shoes Australia, in 2013. This company was previously unrelated to the American Payless ShoeSource. The company also operates many stores in Asia, including nineteen in Indonesia, 27 in the Philippines, one in Malaysia and one in Singapore. It also operates four in the United Arab Emirates. In 1997, the company opened its first Canadian stores. In the same year, it acquired the chain Parade of Shoes. In 2004, the company undertook a large scale restructuring and decided to shut down the parade of Shoes chain, leading to the closing of hundreds of outlets.

Payless ShoeSource stores mainly sell discount footwear at cheaper prices.. They sell shoes for men, women, boys and girls. Their line of men’s shoes includes boots, casual footwear, dress shoes and sandals. The women’s shoes include boots, sandals and sneakers, but also include dance shoes, flats, pumps and heels. The boys and girls lines are similar in range to the adult lines, but are more suitable for children, including some shoes featuring cartoon characters. Payless ShoeSource also sell footwear accessories. These include leg warmers and boot cuffs, handbags, socks, and even a wedding line featuring bridal shoes and groom dress shoes!

To find your closest Payless store, just search “Payless near me”.

Payless Near Me – Payless Facts

The American Payless stores were well known in the 1980s for their Pro Wings discount sneakers. These shoes usually featured velcro fasteners instead of traditional shoelaces. NBA player Lebron James was approached by Payless in 2014 in order to help revive the sports line. Their offer included paying James $50 million every year for ten years!

In the original Pay-Less National stores, the average price for a pair of shoes was under three dollars! When Payless bought out the Hill Brothers stores in St Louis in the 1970s, these stores were operating with the slogan “two for five – man alive!”. In these stores, women’s and children’s shoes were sold at five dollars for two pairs! Today the company sells most of its shoes for under fifteen dollars a pair. The company was able to keep prices low by being a self-service store, meaning that customers would select products from shelves themselves, rather than an employee filling their orders for them. This meant that they could employ fewer staff, which helped to keep costs down.

Much of Payless’s early growth came as a result of the post-war economy. After World War II, shoes began to be imported very cheaply into America. The Baby Boom of the late 1940s and 1950s led to a rise in discount, family-oriented retailers, to help cater for the huge wave of middle- and low-income families. Many of these retailers, Payless included, focused heavily on women and children’s products.

After renaming to Volume in the 1960s, the company went public to raise funds for extra growth. This growth led to an annual growth of twelve new stores every year!

In 1966, Volume was having difficulty keeping up with inventory with its manual processes, and so it ordered a computerized inventory-keeping system. Unfortunately, disaster struck and a tornado destroyed the company headquarters and warehouse in Topeka, Kansas, the night when the computer was first activated. After this, a new headquarters was set up elsewhere in Topeka.

Payless adopted a strategy early on, whereby they would order shoes from many different manufacturers. This was done so as to protect the company against any one supplier facing inventory issues or sudden shortages. Payless later started to order shoes to certain specifications, in order to maintain a consistent level of quality. These custom shoes eventually evolved into Payless’’s in-house brands. Payless was therefore able to keep a tighter hold on style and quality, while other discount chains in the 1960s and 1970s had suffered due to these.

Search “Payless near me” for your local Payless store!