Pho is a popular Vietnamese dish, both in Vietnam and also in many other countries. It is a noodle soup made using broth, noodles, herbs and meat. It is a popular street dish in Vietnam, and can be consumed at any time of day. Its exact origins are unknown and hotly debated, however it is believed to have been created in the early 1900s. The refugees from the Vietnam War helped to spread the dish all over the world.

There are actually a few variants of Pho in different places around Vietnam. Experimentation with other foods and cuisines during the 1900s helped to create many different types of Pho dishes. To find a place to buy Pho in your area, you can easily search for Pho near me.

Pho Near Me – Find it on the Map

Pho Near Me – Pho Trivia

Where and when did Pho originate?

Pho is believed to have originated in the north of Vietnam, southeast of Hanoi, in the early 1900s. The villages of Van Cu and Dao Cu are believed to be the original source, although this is contested. Pho was originally sold by street vendors carrying mobile kitchens, during dusk and dawn. These kitchens consisted of a carrying pole, from which two cabinets hung. One cabinet contained a cauldron hung over a wood fire, and the other contained the noodles and spices, as well as cookware and a preparation space on which to make the Pho. The first fixed Pho stands were a Vietnamese-owned stand and a Chinese-owned stand, both in Hanoi. 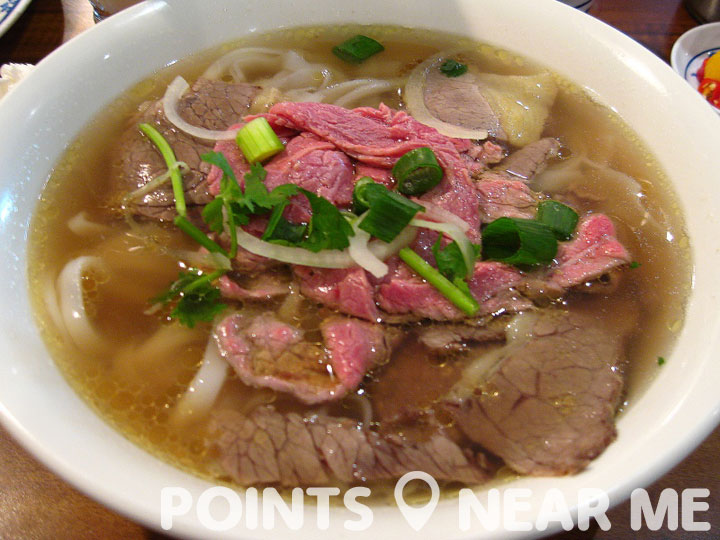 Some popular types of Pho are served with beef cooked rare. This variant has two types of beef, both rare and well done.

How did Pho spread?

Pho did not spread out of the north of Vietnam until the Partition in 1954. Because of this, nearly one million Northern Vietnamese people fled into the south. They brought with them culinary skills, traditions and recipes. Pho was not popular in the south until this time. Once it had entered the south, it was exposed to southern Vietnamese cooking techniques and began to evolve significantly. Following the end of the Vietnam War in 1975, many refugees left Vietnam. This brought the Pho dishes into the West, especially into Canada, the United States, and Australia. As relations between Vietnam and the United States improved in the 1980s and 1990s, Vietnamese food began to grow in popularity, especially in Texas and California. Today Pho can be found in many cafeterias, on college campuses and in corporate offices.

What are the ingredients in Pho?

Pho consists of a broth, rice noodles known as ‘banh pho’, herbs and meat, usually beef or chicken. During the 1920s, vendors experimented with adding other spices and ingredients. Some vendors added a seasoning made from cinnamon, star anise, thao qua and cloves. This seasoning was known as ‘hung liu’. Some also added sesame oil and tofu to the Pho. None of these variations achieved much popularity, however. A variant known as ‘Pho tai’, which was served with rare beef, was created in the early 1930s. Pho made with chicken began to appear in the late 1930s. One possible explanation for this was that beef was not typically sold in markets on Mondays and Fridays. After spreading to the south of Vietnam following the Partition, southern foods began to influence Pho. Culantro, cinnamon basil, limes, bean sprouts, chili sauce and Hoisin sauces became typical ingredients. Back in the north, private Pho restaurants were seen as capitalism and banned, and most became nationalized. They began to use old rice for their Pho. Street vendors, operating illegally, were forced to import potato flour noodles.
Search “Pho near me” to find a restaurant or business that sells Pho in your area.

Pho Near Me – Pho Facts

After the Vietnam war, meat and rice became scarce, and the state-owned Pho restaurants sold meatless Pho. This Pho was named “pilotless Pho”, as a reference to the unmanned reconnaissance drones used by the United States Air Force. The Pilotless Pho consisted of a broth with MSG added for taste. Bread or cold rice was served as a side dish when it was available.

The origin of the name “Pho” is debated. Some believe it originated from a French word. French settlers in Asia commonly ate beef, whereas cows in Vietnam were used as working animals and pork and chicken were the more common meats. Some scholars believe that Pho comes from the French term “pot-au-feu”, meaning “pot on the fire”. Others believe that the word comes from French soldiers describing some steaming Vietnamese dishes by using the word “feu”, meaning “fire”.

Other scholars believe that the word is from Cantonese, rather than French. Some say that it comes from “nguu nhuc phan”, meaning “cow meat noodles”, which was commonly prepared and sold by Chinese immigrants in Hanoi. Others believe it comes from a dish created from strips of water-buffalo meat, later substituted with cheap scraps of beef, served in broth with rice vermicelli. Chinese vendors would spruik this dish by shouting “Beef and noodles”, which in Cantonese is “ngauh yukh fan”. Eventually they began to say “Meat and noodles”, which is “yukh fan” in Cantonese, or “nhuc phan” in Vietnamese. Some say that the ‘n’ from “phan” was dropped because “phan” can also mean “excrement”, thus leaving “pha”, which when elongated is pronounced as “pho”.

The broth for beef or chicken Pho can be made a number of ways. It is usually made by simmering beef bones, oxtails, charred ginger and onions, flank steak and various spices. However, a greater flavor can be obtained by leaving beef on the bones when simmering. Chicken bones will also produce a similar broth, and is usually made with the same other ingredients.

At one Pho restaurant, Pho Binh, American soldiers were dining on the lower floor while Viet Cong agents were planning the Tet Offensive on the upper floor!

Former US President Bill Clinton visited the Pho 2000 restaurant during a visit to Ho Chi Minh City in 2000.

Search “Pho near me” to find a place where you can buy some Pho!