Plato’s Closet Near Me

For the budget savvy shopper looking to score new and gently used clothing without the hefty price tag, Plato’s Closet is pretty much a shopping mecca. Plato’s Closet features trendy, name brand, gently used clothing that can be purchased at thrift store prices. You can also make cash selling your old clothes, given that they’re in decent condition.

Plato’s Closet Near Me – Find it on the Map

When was the first Plato’s Closet founded?

Thrift stores and consignment shops have been around for decades, but stores such as Plato’s Closet are a fairly recent endeavor. The first Plato’s Closet store was opened in Columbus, Ohio by founders Lynn and Dennis Blum in 1998. They were experienced business owners who had a long history of creative recycling. They turned to their teenage son to help them create a name for the business. While doing research for a school project, the Blum’s son became very fascinated and gained a great deal of respect for the pioneering Greek philosopher Plato. His theories on reusing and preserving were a great parallel to the ideals that Blum’s parents had on recycling and reusing old goods. Closet was a natural fit as it related perfectly to the centerpiece of every teenager’s room and their love of new clothing. The brand was eventually purchased by Winmark, who also own stores such as Play It Again Sports and Once Upon A Child. Every Plato’s Closet stocks up on brand names such as Hollister, Abercrombie & Fitch, Gap, Forever 21, Express, and Dr. Martens, all of which are sold at a markdown between 50% and 75%. Unlike consignment shops, Plato’s Closet also pays sellers on the spot. Used clothes are typically purchased at between 30% and 40% of what Plato’s Closet intends to sell them for. Consider these facts as you search Plato’s Closet near me. 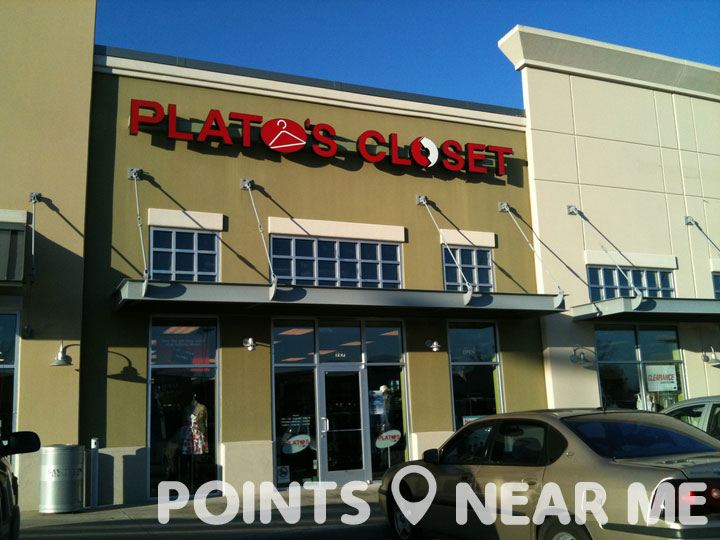 Every Plato’s Closet stocks up to date and trendy items.

Is Plato’s Closet a thrift store?

Absolutely not! It may be easy to lump Plato’s Closet in with other types of thrift stores such as Goodwill, but the term does not apply to Plato’s Closet. This chain focuses exclusively on name brand and high end fashions. You’ll find a ton of Abercrombie & Fitch, American Eagle, Levis, Dolce Vita, Aeropostale, and stores of a similar vein. Essentially whatever name brands are hot for teens and young adults at a given time are what Plato’s Closet is looking to buy. When a certain brand or trend is no longer in favor, Plato’s closet ditches that brand for whatever is currently in style. For example, brands such as Madewell and Zara are becoming popular with young adults, making them desirable items for purchase. IN addition to selling gently used clothing, shoes and accessories, the brand also sells books, games CDs, limited homegoods, and pictures frames. Each item is meant to fit the teen and young adult age group rather than individuals in their late 20s. Consider what you might want to sell or buy as you search Plato’s Closet near me.

Know Before You Go

Something you’re going to want to keep in mind prior to visiting or selling at Plato’s Closet is that they are a corporate store first. This means they abide by written rules and employees have a certain set of standards that they must follow when it comes to buying clothing from consumers. Before you go, remember not to take your trip personally. People have a tendency to get upset when Plato’s Closet does not find their clothing desirable for resale. As humans we tend to internalize this as somehow meaning that we have bad style. Plato’s Closet assures that it has nothing to do with your particular fashion sense and everything to do with what is currently selling. The associates at the store are not there to make fun of your items or your personal style. They are trained to take a very particular approach to deciding whether or not an item is worthy of buying. Odds are when you wake up in the morning you’re not laying your clothing flat and searching for imperfections. Associates at Plato’s Closet are looking for minor stains, small holes, improper stitching, and overall wear and tear on the item. When you search Plato’s Closet near me, think about the condition of your clothing and judge it from the perspective of a buyer.

When considering whether or not to buy an item, Plato’s Closet looks for three main things which is known as “The Big Three.” The first thing that a buyer will look for is that the item is in good shape. This means it cannot have any rips, stains, or fading. It must also be freshly washed. The item must also be ready to wear in order for them to put it out on the sales floor. The second factor, which is a corporate rule, is that the item has to have been in the stores within the last year to year and a half. They heck this through tags in the clothing. Corporate sends every associate pictures of every brand and their most current labels, they label them hot, warm, and cold. The hot labels are the most current ones that are in stores right now. Warm labels are those that are fairly current, but a touch older than what the store may be hoping to buy. The cold items are too old or are no longer in style. The third and most crucial thing that Plato’s Closet looks for is that the style is one that sells well. Unlike many consignment shops that make you wait until your item is sold to give you a profit, Plato’s Closet gives you the cash right away. Because of this it is extremely important that they are taking in styles and brands that have been selling well in order to create a successful inventory. If an item on store is in the clearance section, it will likely be awhile before a similar item is purchased again. As you search Plato’s Closet near me consider if your items match the “Big Three.”