Whether you live in a rural, urban, or suburban area, finding a playground is a great way to entertain your children and promote beneficial socialization. Not only do most playgrounds boast play equipment that can’t be purchased for the home, but they offer the opportunity for children to interact with others who are in their age group.

Are you interested in finding a playground near you? You’re in luck! Simply browse playgrounds near me on the map below and find a list of playgrounds located within a few miles of your current location. Need a bit more information on playgrounds? Read on for interesting facts, trivia, and history on playgrounds in the US!

Playgrounds Near Me – Find it on the Map

When did playgrounds first emerge?

In the present day, playgrounds pepper every borough, town, and city. They offer convenient and safe places for children to play, engage, and socialize. While it may seem like playgrounds have always held a place in history, their more recent than you think. In fact, children of the 19th century did not have formal playgrounds at all. The earliest inception of a playground is the “sand gardens” that originated in Germany in 1885. Playgrounds didn’t reach Boston until 1886. Until the turn of the 20th century, playgrounds remained highly uncommon and rare in public spaces. Finding one was basically the equivalent of finding a needle in a haystack. But with industrialization and urbanization, so grew the concern for public welfare and community happiness. Humanitarians viewed playgrounds as a solution to the cramped living quarters, less than stellar air quality and social isolation that many working class individuals faced in developing areas, especially within the confines of a major city. This concept was developed to keep children from playing in the streets, all while helping them to stay healthy, socialize with other children, and take part in the pleasures of being a child. As you search playgrounds near me, consider just how prevalent playgrounds are today. Could you have existed in a world in which playgrounds for your children were far and few between? 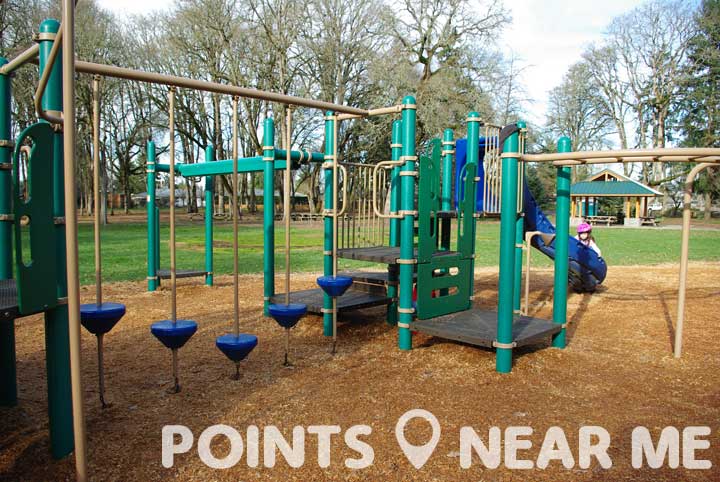 A traditional playground in Oregon.

When did the Playground Association of America first form?

That’s right, everything has an association in the states, including Playgrounds. Luckily, this association formed to help yield a better quality of life for all. The Playground Association of American officially formed in 1906, with the goal of promoting the idea of playgrounds to communities. This included ideas for benefits, construction, layout and design. Literature offered by the Association also included the conduct and activities that were to occur on playgrounds, often dictating an ideal and proper playground. According to historians, the proper playground was to have separate play sections and athletic fields for boys and girls and would be supervised. Each playground was also to feature shelters and toilet/bathing facilities, shady areas, garden plots, and swimming pools. Of course, not every community had the land or money at their disposal to create these idyllic playground areas, but many did. As you search playgrounds near me, think about your local playground. Does it meet the standards of the early Playground Association of America?

A Fruit and Scent Playground

Here in the states, playgrounds often fit a fairly standard format. Much like the early literature produced by the Playground Association of America, a typically American playground boasts some play equipment, athletic fields, and perhaps a swimming pool. In Europe, you’ll find that many playgrounds are designed to be far more engaging and unique than those found in the United States .For example in Sweden, you can find the fruit and scent playground. A banana slide, strawberry spinners, an orange see-saw, cherry swings and a watermelon jungle gym are all included in this quirky playground located just to the south of Stockholm. The theme is revered by those living in Sweden. Not only is it sweet to look at, but it teaches children the importance of fruit over junk food. It also entices children to eat more fruit as they begin to associate fruit with play, rather than something that almost seems like a punishment. You can also find some highly unique parks in Japan. For example the Nishi Rokugo (tire park) in Tokyo is made up for more than 3,000 tires, all designed to look like dinosaurs, monsters, bridges, slides and swings. There are also many loose tires for kids to stack and hop on. Not only can children play at this park, but adult are also encouraged to take part in this fun park. Can you think of any interesting playgrounds in the US as you search playgrounds near me?

The Benefits of Play

As you search playgrounds near me, consider the benefits of play for children. Play offers many physical benefits to kids, including a lessened risk of obesity, diabetes, and issues of anxiety/depression. What you might not know is that play also offers many internal benefits that you can’t see. A child’s emotional development is very highly influenced by the act of play. Free play is believed to have an important role in a child’s emotional growth. Research has shown that play helps children in three areas: it builds self confidence and esteem, it allows them to experiment with various types of emotions, and it helps to release emotions from trauma. Studies have indicated that free play allows children to express their emotions and learn to deal with their fears and scary experiences in a safe environment. It also allows them to express themselves without the fear of punishment or being held back. When kids use their imagination to pretend play, they experience a whole host of different feelings and outcomes. This allows them to better handle these situations when they encounter them outside of free play. The experiences will change as the children grow older, but they’re no less important. Pre-schoolers develop emotional strength and stability when partaking in free play, where older children will develop a sense of spontaneity and humor.