Shoe Repair Near Me

Why plunk down the money for a new pair of shoes when you can hit up a shoe repair shop to have your favorite pair of kicks repaired for a reasonable price. Shoe repair has been a craft for hundreds of years. Experienced artisans and cobblers have been saving soles and stitching seams to guarantee customer happiness time and time again.

Shoe Repair Near Me – Find it on the Map

What’s the difference between a shoemaker and cobbler?

Most individuals searching shoe repair near me, have no idea what the difference is between a shoemaker and a cobbler. In fact, most of us aren’t even aware that there is a difference. However, historians have stated that boot and shoemakers are often times called “cobblers,” but that the term itself is most appropriately applied to shoe repairmen. Individuals who actually make footwear from the ground up are known as “cordwainers.” This is derived from the word “cordovan” which was a reddish leather that was produced in Spain. Therefore one that worked in cordovan was a cordwainer. Shoemakers who prepared and created made-to-order shoes were known as “bespoke” makers rather than cobblers or shoemakers. While the distinction given to these crafts may not matter in the long run, they certainly matter to the keepers of shoe history! 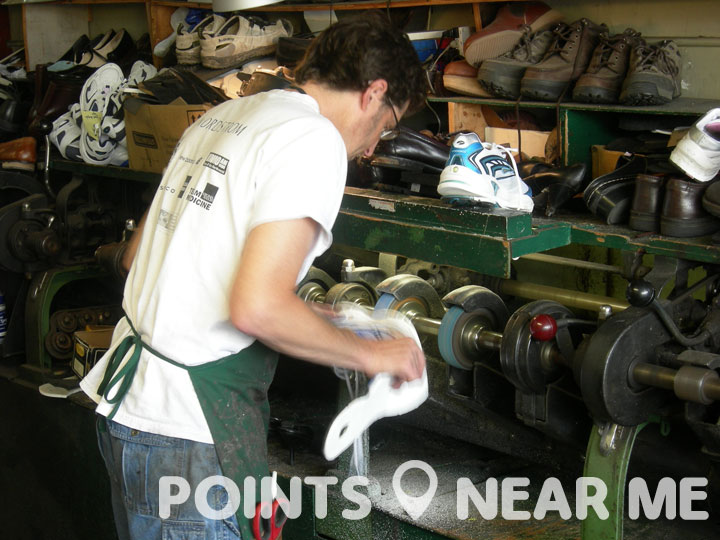 Shoe repair is truly an art form in its complexity and creativity.

Who is the patron saint of shoemaking?

What, you didn’t know there was a patron saint of shoemaking? Now you do. Consider this while searching shoe repair near me. Shoemaking is rich in tradition, within the trade itself, the history began with St. Crispin. St. Crispin is the patron saint of shoemakers. Since Medieval times, October 25th has been celebrated as St. Crispin’s day and is considered a shoemaker’s holiday. In the past, shoemakers and repair shops would close their doors early on this day, in order to celebrate and commemorate St. Crispin. St. Crispin was born into a wealthy Roman family in the third century A.D. Along the way, he converted to Christianity. Since this was not an approved lifestyle for someone of noble Roman blood, Crispin was disinherited by his own family and forced to rely upon his own resources. With that he set out to become a shoemaker. Although teaching the gospel was truly his life’s work, Crispin made shoes in his spare time to make ends meet. He was eventually put to death for his beliefs in Soissons, France in 288. AD. Who knew the history of shoe repair was so involved?

The Center of Shoemaking

If you’re interested in finding shoe repair near me, consider where the epicenter of shoemaking once was. For a bulk of history, Northampton, England was the center of shoemaking for England and Europe. After the American Civil War, many of the trades that were for centuries done by highly skilled and trained craftsmen, were industrialized. Naturally there was a great resistance to the very concept of a factory. Many found it to be a form of slavery, especially with the minuscule wages being paid. Boot and shoemakers were voracious in their resistance to the industry. This is why shoemaking was one of the last industries to be converted. During the late 1800s, many prize work competitions were staged to demonstrate the fact that factory workers were not on the same level as skilled craftsman. The craftsmen prepared some of their fanciest and most refined pieces for these competitions, to further prove the point that skilled craftsmen are an absolute must.

Why Sneakers Are Called Sneakers

If you’re searching shoe repair near me hoping to get a pair of high end sneakers repaired, consider this. According to a New York Times article, in the late 1800s individuals started using the word sneakers because of the rubber sole. Apparently the rubber sole on sneakers allowed the individuals to “sneak” around without making a sound. Now you know how sneakers earned their funky name. That’s a fact worth sharing!

Say what? If you’re searching shoe repair near me, read on for some insight into this fact. In the early 1300s, Britain established the first way to accurately measure shoe size amongst men and women. King Edward II declared barleycorn the basis for which all shoes would be measured. He ruled that the length of three barleycorns is exactly equal to one inch, making this the standard for shoe sizing. Of course, you’ll never have to measure your feet in barleycorns in the modern age, but it’s an interesting fact nonetheless.