The postal service actually predates the Declaration of Independence, and the Constitution. The current USPS was formed in 1971, however. You can find your closest United States Postal Service location just by searching for “USPS near me”!

USPS Near Me – Find it on the Map

USPS Near Me – USPS Trivia

How was the USPS founded?

The first colonies in America attempted to set up various postal services, but these were very limited in scale. They usually involved one colony setting up an office at which the colonists could access mail services back to England. Some of the larger colonies also set up inter-colony postal services, but these were also very limited and disjointed. Finally in 1691, King William III and Queen Mary II issued a letters patent to set up the North American Postal Service. This patent also included the right to collect a postal tax, but this was abolished the next year. The first postmaster general was Thomas Neale, and his deputy was Andrew Hamilton, Governor of New Jersey. The first Continental Congress eventually overthrew the English based postal service, and in 1775 setup the United States Post Office. Benjamin Franklin served as the first postmaster general for a period of fifteen months. After the American Revolution, the official Post Office Department was established, and was given special powers by the Constitution. 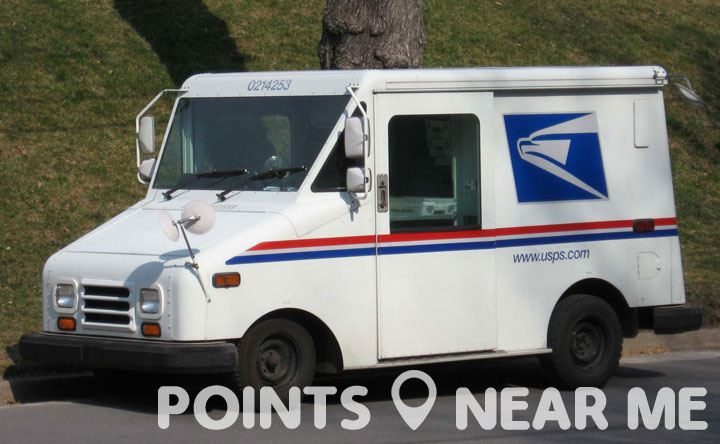 Many of the USPS’s 211 thousand vehicles are right-hand-drive, so the driver can more easily access street-side mailboxes.

How is mail delivered?

Originally the Post Office Department used a central sorting location in Washington. All mail was sent here and then distributed to its recipients. By 1869, there were over 27 thousand post offices, and the department began to sort mail in special railroad cars, called Railway Post Offices. Today most mail is delivered by road vehicles. The USPS operates the largest fleet of civilian vehicles in the world, with over 211 thousand vehicles. In 2009, the USPS used a total of 444 million gallons of gas in total, costing it over $1.1 billion! The postal vehicles are unusual for American roads, in that most of them are right-hand-drive. This enables the driver easier access to the side of the road, where the mailboxes are. Standard USPS vehicles do not display registration plates, but instead have identification numbers printed on the vehicle’s front and rear.

How large is the USPS?

The USPS employs about 490 thousand career postal workers, and over 131 thousand non-career staff. The USPS operates over 31 thousand retail offices in America. It handles 47% of the whole world’s mail, and each day it delivers over 600 million pieces of mail to over 140 million delivery points! The USPS tends to operate at a loss. In 2014 and 2015, its losses were approximately $5 billion. Its revenue is usually around $68 billion. Of this $68 billion, $28.3 billion comes from first class mail, $17.6 billion from standard mail, $15.1 billion from shipping and package services, and $1.6 billion from periodicals.

To find your closest post office or other USPS location, search for “USPS near me”.

USPS Near Me – USPS Facts

The major competitors to the USPS are the United Parcel Service (UPS) and FedEx Express. These other businesses compete in private package delivery services, however according to the law, the USPS has exclusive access to US Mail post boxes, and personal letterboxes.

The USPS is required by law to serve all Americans at the same price and standard of quality, regardless of geographical constraints and challenges. It is often believed that the USPS motto is “Neither snow nor rain nor heat nor gloom of night stays these couriers from the swift completion of their appointed rounds”; however the USPS does not officially have a motto. This quote is actually inscribed on the General Post Office in New York City. One of the architects who worked on the borrowed the quote from the writings of the Greek historian Herodotus. Herodotus was actually referring to the mounted postal carriers during the battles between the Greeks and the Persians around 500 BC.

The Post Office Department operated the first public telegraph lines in America. The first telegraph line ran between Washington and Baltimore, and eventually extended to New York, Boston, Buffalo and Philadelphia. During World War II, the Post Office operated a special “V-Mail” service, used for military communications. Documents were censored, converted to microfilm, transported, and reprinted at the destination. Microfilm was used to save room on military transports, which often needed to carry large amounts of other cargo.

The USPS employs law enforcement agencies. The United States Postal Inspection Service (USPIS) is one of the oldest such agencies in the country, and helps to protect the USPS, its employees and its customers, and also protects against criminal misuse of the postal service. The USPIS oversees the Postal Police Force, whose agents patrol high-risk postal facilities.

Starting in 1810, mail was delivered every day of the week. Religious leaders noted that Sunday morning church service attendance was dropping because local post offices were also serving as gathering places. In 1828, religious leaders lobbied the US government to close post offices on Sundays. The government declined, however, and mail continued to be delivered on Sundays until 1912. Today all but a few towns and communities lack Sunday postal services (Express Mail is handled on Sundays, however). These communities include Loma Linda, California, which has a very large Seventh Day Adventist population, and mail services run every day except Saturday and certain federal holidays. In 1957, the post office briefly terminated Saturday deliveries due to budget constraints, but they were quickly restored. In the late 2010s, Saturday delivery was once again reconsidered, and in 2013 it was announced that mail would only be delivered on weekdays. Congress reversed this decision before it took effect, however.

Search “USPS near me” to find a local post office or other USPS location.