Water Parks Near Me

Is the heat getting to you? Are you looking for something fun and exciting? Maybe you just love the thrill of a good waterslide. If you are trying to find a great water park, check out The Water Parks Near Me map below. It will show you the closest water parks to your location.

Simply click on the location on the map and learn the hours, address and phone number. It will even provide you with a review and directions to help you select the best park and the quickest way to your adventure.You can also learn about the history of water parks in America and we have the list of the top ten water parks at the bottom of the page. Have a relaxing and exciting time!

Water Parks Near Me – Find it on the Map

A history of water parks in America

While the very first wave pool was created at Big Surf Waterpark in Tempe, Arizona in 1969, it is not considered the first full water park. Wet ‘n Wild in Orlando, Florida is considered to be the very first water park in the United States. It was opened back in 1977 by George Millay, the creator of Sea World. Today you can still go on three of the original attractions, the Lazy River, The Wake Zone and Wave Pool Surf Lagoon; however, you will have to move fast, as the first water park, Wet ‘n Wild in Orlando, Florida is closing on December 31, 2016. It will be replaced by a park named Volcano Bay.

While Wet ‘n Wild lost money in the first year of its operation, water parks have become a huge financial success. Today, there are over 1,200 water parks in available to visit in the United States. More than the rest of the world combined! With an average attendance of over 85 million people. Without question, summer is always the busiest season, but you can go to indoor water parks, the first of which opened in 1994, year-round. 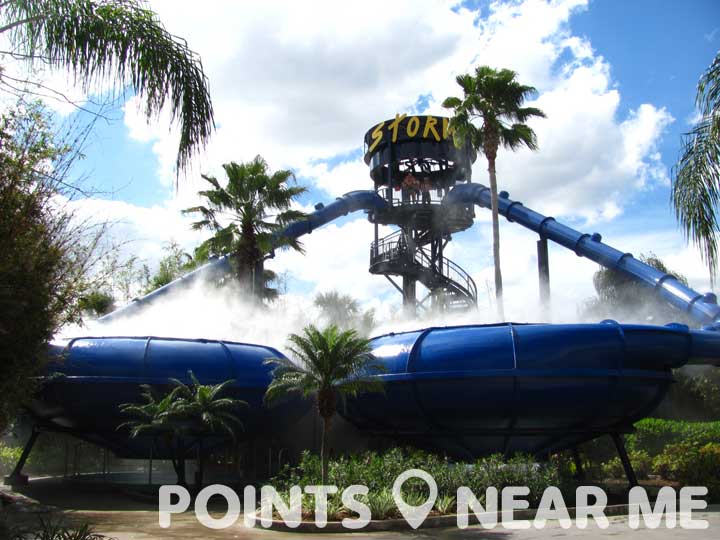 The Storm one of the signature rides at Wet ‘n Wild Water Park in Orlando, Florida. The original water park.

So, from one ambitious entrepreneur in 1977, the United States has fallen in love with water parks and they have truly taken off. In less than 40 years, water parks of all sizes and shapes have been created for you to enjoy. Whether it is enjoying the simple relaxing flow of a lazy river, testing your strength against the power of a wave pool, or facing your fear of heights zipping down a water slide, you can do it all at a water park. It has definitely become one of the prime places to enjoy your family vacation.

So enjoy your search about Water Parks Near Me and get your next great adventure planned.

While most water parks are open from mid-morning until in the evening, if you truly want to enjoy an experience, the Tropical Islands Resort in Germany is open 24 hours a day, 7 days a week, all 365 days a year. The perfect place for someone who just can’t get enough time in the water.

With over 1,200 water parks in the United States, creating a top ten list is a difficult task. Here are 10 that any water park fan would enjoy.

Part of Walt Disney World in Orlando, Florida, this water park has got several falls, slides and an awesome surf pool. It even offers surfing lessons.

Also part of Walt Disney World in Orlando, Florida, this water park has got everything from a chair lift, to a large wave pool. It has got something for everyone.

Rounding out Orlando, Florida in the top 3. Aquatica is part of Sea World. Here, you have high speed slides and even a slide right through dolphins. It doesn’t get any more special.

This is actually 2 theme parks, that you get for the price of one! So if you want to enjoy both the Thunderbird roller coaster and the Mammoth Water Coaster, you can. Also, your soft drinks are included in your ticket price. They are also proud of their cleanliness.

In addition to being the largest water park in the United States, it has got some amazing rides, including body surfing, the 400 foot Scorpion’s Tail and the Point of No Return, which is almost a completely vertical drop.

With 11 Rides and Slides, and within a short drive of the Virginia Beach, Water Country USA is a prime place for family vacations. They even have pint sized slides for the little ones.

Kahuna Laguna prides itself in being the largest indoor water park in all of New Hampshire. With the exception of a few regularly scheduled maintenance days, this water park is open year round and offers bookings for birthday parties and other special events.

This water park is connected to 3 resort hotels and has deals with 4 others that offer shuttle service to the water park. It also offers fundraising programs for schools and non-profits.

In the beautiful Smoky Mountains, this amazing park with 16 different slides and attractions can be found. In addition, it is connected to a theme park with 40 different rides!