Jimmy John’s Near Me

Jimmy John’s Franchise, LLC is a sandwich delivery business and restaurant chain. Since its origins over thirty years ago, the company has expanded to cover almost the entire United States. Today there are over two thousand locations in 46 states. Recently the business has been opening two hundred new locations every year. 98% of the locations operate as franchises.

Jimmy John’s Near Me – Find it on the Map

How did Jimmy John’s begin?

When Jimmy John Liautaud graduated from Elgin Academy in 1982, he got the second-worst marks of his class. His father told him to either join the military or start a business. Liautaud accepted $25,000 from his father to start a hotdog business, but later decided to switch to a sandwich business instead. In January 1983, he opened the first location of the business in a garage in Charleston, Illinois. He turned a profit in his first year, partly due to marketing with free samples, and partly by delivering to the nearby dormitories of Eastern Illinois University. The agreement with his father meant that he owned 48% of the business, while Liautaud himself owned the remaining 52%. In 1985, however, he bought out his father’s stake, and the next year he opened his second store in Macomb, Illinois. By the following year he had opened his third store in Champaign, Illinois, and in 1988 he met Jamie Coulter, who would later become CEO of Lone Star Steakhouse and Saloon, who mentored him in business practices and management. 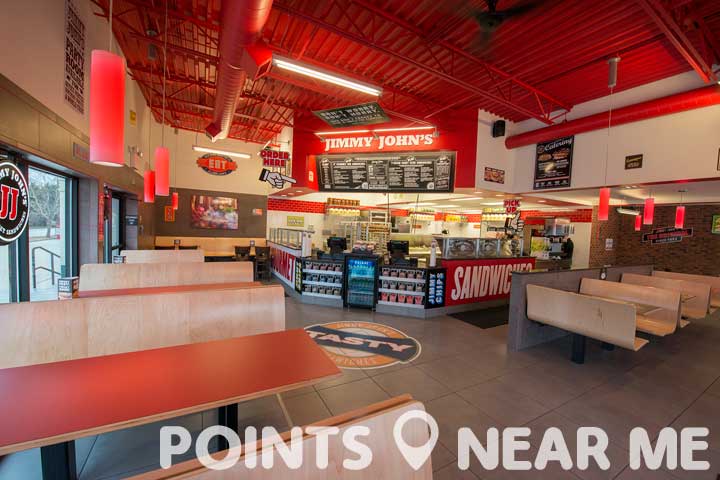 Inside one of the two thousand Jimmy John’s locations across America.

How large is Jimmy John’s?

The first Jimmy John’s franchise store opened in Eau Claire, Wisconsin, in 1993. By 2001, the hundredth store opened in Mt Pleasant, Michigan. The five hundredth opened in Seattle, Washington, in 2007, and the thousandth in Beaverton, Oregon, in 2010. In 2007, Liautaud sold 33% of the business to Weston Presidio, a private equity firm, in order to have a partner with real-estate experience. Liautaud believed he would need this in order to continue to expand and open more locations. Today Jimmy John’s has 2,522 locations. The company headquarters is in Champaign, Illinois. Each franchise has an annual average net profit of about $280 thousand, while annual sales can be as high as $1.2 million. Startup costs for franchises are usually between $300 thousand and $450 thousand.

What does Jimmy John’s sell?

Jimmy John’s mainly sells sandwiches, with various ingredients including ham and cheese, roast beef, turkey, cucumber, lettuce and onion, among many others. The stores also sell side dishes, including various flavors of potato chips, and cookies. The stores also sell soft drinks, including coke, sprite and Dr Pepper. The sandwiches can be sold individually, or customers can purchase them in boxes of larger sizes, including twelve or twenty-four. Gift cards are available for use within Jimmy John’s stores. The stores feature the ability to order products online, and have them delivered to the customer, as well as in-store purchases.

To find your closest store, just search for “Jimmy John’s near me”.

The first location in Charleston, Illinois, was located inside a garage. The store ran on a very tight budget, and had only one fridge, an oven, a meat slicer and a freezer. There wasn’t even an ice machine, so sodas were served without.

New Orleans Saints quarterback Drew Brees is a big fan of the restaurants. When he was a student at Purdue University in Indiana, he frequented the stores. He loved the #9 Italian Night Club sandwich, and decided to make 9 his jersey number. Brees owns five Jimmy John’s franchises in the New Orleans area, and plans to open up to twenty more!

Former Governor of Massachusetts Mitt Romney also enjoys Jimmy John’s. During his 2012 presidential campaign, he always had Jimmy John’s sandwiches on his tour buses and even his smaller vehicles.

Everything in Jimmy John’s is made freshly. The bread is baked fresh throughout the day. Produce and meat are cut fresh every morning, and tuna salad is made on-location as well. Leftover day-old bread can be bought for very cheap.

Prior to 2012, sprouts used to be available as an ingredient choice. However, certain illnesses started to appear that were associated with raw clover sprouts on sandwiches, and they were removed from every store.

Jimmy John’s stores have a secret menu, as well as the main public one. Included on that menu is the ‘Gargantuan’, which contains one portion of every meat except tuna and bacon; the ‘Noah’s Ark’ that contains double meats; the ‘Chuck Norris’ that contains tuna and bacon; and the ‘Slim BLT’, six slices of bacon on an 8 inch roll.

One of the important principles for each store is to serve food very quickly. In-store purchases are prepared in less than thirty seconds, while deliveries should be out the door in less than four minutes. In order to improve efficiency, Jimmy John’s decided to limit some of their topping choices. The only mustard available on sandwiches is Dijon mustard, and provolone cheese is the only cheese. Yellow mustard can be purchased, but it comes in packets and not in sandwiches.

Every week, Jimmy John’s creates a total of around 210 jobs, due to the number of new locations that open. Since first starting in 1983, the chain has created over 45 thousand jobs in total. The business has a relatively low employee turnover, too, probably because of the fast-paced way in which the businesses are run.

In 2007, the business began sponsoring NASCAR, first with driver Steve Wallace, and then Kevin Harvick. In 2015 it bought naming rights to the Utica, Michigan baseball stadium. Other sponsorships include the Detroit Red Wings and the Chicago Blackhawks.

Search “Jimmy John’s near me” to find a store near you.