Are you looking for new furniture? Do you need to rent to own? Well, Aaron’s is a good choice. They are one of the largest rent to own furniture companies in America. With over 2 thousand locations in 48 States, there is sure to be one near you.

Just check out the Aaron’s Near You Map below to see all of the locations around you. If you click on a location, it will provide you with the address, hours of operation, the phone number and even some reviews of that particular location. It will also have the link to the Aaron’s website and with a few clicks you can get directions to find the quickest way to get there.

Aaron’s Near Me – Find it on the Map

Aaron’s Near Me – Aarons Trivia

A Brief History of Aaron’s

Aaron’s Inc. recently celebrated its 60th anniversary, having opened back in 1955. The first years of the company were shaky and entertaining. The company was founded by R. Charles Loudermilk, who had previously worked a few different jobs, including a tour in the navy. 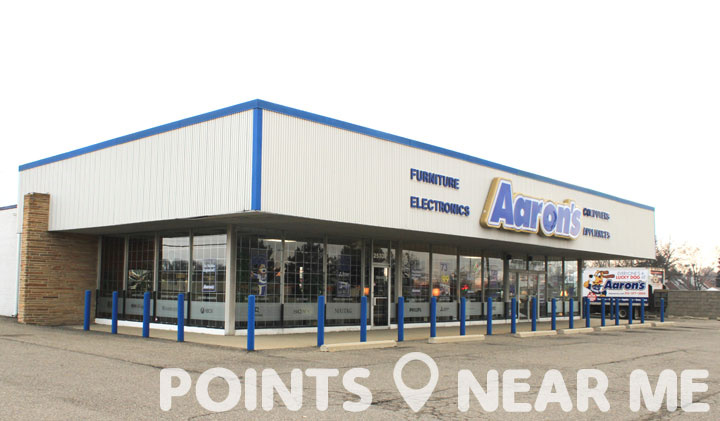 Aaron’s Inc is the largest furniture rental store in America with branches in almost every state.

He started his company in Atlanta Georgia, his home town. They initial funds of $1000 came half from a bank loan and half from the investment of a partner. At first, the company didn’t have a storefront, in fact, it didn’t for several years. The company didn’t work the way it does today, with a major focus on rent to own.

The company started with a strictly rental business. When Loudermilk got his first order, 300 chairs for an auction, he and his partner tracked down 500 chairs from a military surplus and purchased them to fill the order. Renting the chair for $0.10 per day per chair; however, due to the unruliness of the chairs and the frustrations in the first order, Loudermilk’s partner bailed on him. Leaving him to run the business all on his own.

For the next several years, Loudermilk was left to deal with the business alone. He never gave up and ever though it required him to work part-time at his mother’s restaurant, he continued to grow his business. After 7 years, he managed to get his own storefront for the business and from there, the company continued to grow. By 1964, the fourth store had finally opened and things were on a role. By the end of the 1960s the company was making $2 million annually and had an inventory exceeding $3 million.

Just as a side comment, as you noticed, Aaron’s did not get its name from the name of the founder of the company. It seems that the name was specifically chosen to make sure they would be the top of the phone-book in the furniture rental category.

The next stage of Aaron’s life came about in 1982 when the company started selling its stocks publicly. This allowed the company to raise more liquidity to start purchasing its competitors. By 1983, Aarons managed to raise itself up to holding 15 percent of shares of the furniture rental market. By 1986 the company had expanded to 146 stores in 20 different states.

The company had the pleasure of celebrating its 2000th store opening in 2012.
As of today, the store operates 2012 stores in 48 different states, the District of Columbia and Canada. So, no matter where you live, when you search Aarons Near Me you should be able to find a location close by.

Aaron’s Near Me – Aaron’s Facts

Aaron Rents, Inc. has some fascinating parts of its history and how it operates that make it rather interesting. So, please enjoy these facts and trivia that should be interesting.

1. A large number of Aaron’s: Rent to Own Furniture are franchise locations. In 1990 Aaron’s first started to offer franchise options for its company. By 1994 the company was listed as second on Franchise Magazine’s Gold 100 list. Today, close to fifty percent of Aaron’s 2000+ locations are franchises. So, if you have between $300,000 and $800,000 dollars to spare, you could look into starting up your very own Aaron’s location.

2. Aaron’s company slogan is a rather simple one, “Own It”, which is aimed at its rent to own options, which are not its only furniture options as they do have a simple rental business as well as a sales of used furniture.

3. Aaron’s wasn’t always in the rent to own business. It didn’t get into the industry until 1987 when it was facing financial difficulties and started to restructure itself. The move started in only 18 locations but proved beneficial and the company started to move towards it on a larger scale.

4. Due to a series of acquisitions, which started in 1971 and became a lot more active in the 1980s, Aaron’s quickly became the largest furniture rental company in America, which it claimed the title in 1984 and has maintained it since. The growth that the company had after it started offering franchise offers for its company has helped protect that status.

5. While you are able to find an Aaron’s in almost every state and Canada, there are two states that are surprisingly absent. Normally, you may think they would be Alaska and Hawaii, the non-continental United States; however, they are Minnesota and Wisconsin. So, as long as you aren’t in one of those locations you will easily be able to track down a location.

6. Aaron’s arranges all of its leasing/rent to own options in house. You arrange with the store when you come in how many payments that you will need to ensure that you own the furniture and have several options including 6, 12, 18 or 24 months. To get approval, you will need to have a job as that is one of their minimum requirements for arranging the purchase.

So, the next time you are looking for some new furniture, some electronics or a smartphone, and are looking to rent to own, be sure to check out your local Aaron’s Inc. You will be able to find it easily with Aaron’s Near Me.