Dave and Busters Near Me

The great arcades of the 1980s have not all died out. They have grown and changed over time and can still be found in safe havens such as Dave and Busters. If you are looking for some classic gaming experiences along with some good food and drink, Dave and Busters is the place for you. Just check out the Dave and Busters Near Me Map below.

It will give you all the locations in your area. Click on a link to get the address, phone number and hours of operation. You will also be able to get reviews from past customers and with a few clicks, directions to the place. Finally, you will find a link to the company website to get some more information. After you are done with the map, you may keep reading on to find more information about the company and find out what the greatest arcade games of all time are.

Dave and Busters Near Me – Find it on the Map

Ever wonder how you create a nationally successful video arcade chain? Well, it takes a good product, some financial backing and a bit of luck. At least, that is what Dave and Busters had. 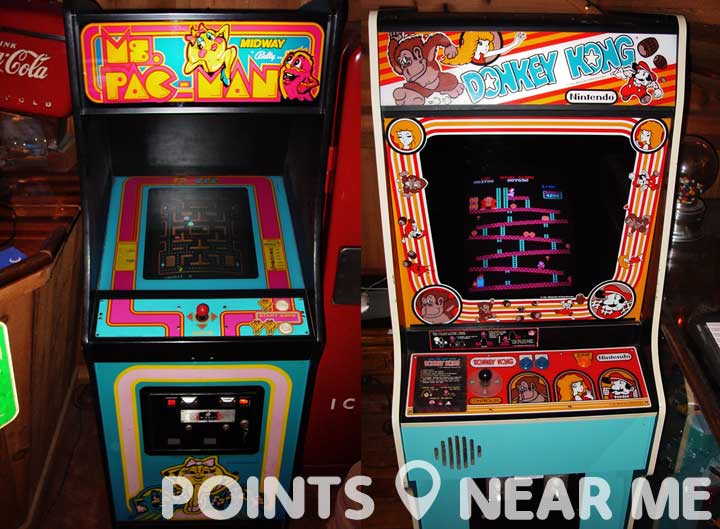 The classic arcade games of the 1980s are still extremely popular in arcades today.

Back in the 1970s, there were 2 young entrepreneurs, James “Buster” Corley and David Corriveau. The young men had two small stores in Dallas, Texas. James had a restaurant that had great food called Busters. David had one of the new entertainment arcades that were starting to become more popular at the time. The two noticed that they had a lot of shared customers and eventually decided it was a good idea to join forces and create a company together, this was the creation of the first Dave and Busters which occurred in 1982.

The next big step in the story comes in 1989 when Edison Brothers Stores purchased a controlling interest (more than 50%) of the restaurant. The money was used to start the expansion of the store and create a chain. From there, the company eventually went public and started to expand and grow more, even purchasing 9 locations of the chain Jillian’s that went bankrupt.

Today, you will be able to find 83 different locations across the United States, and Canada. So, if you are near a major center, you have a great chance of finding a Dave and Busters when you search Dave and Busters Near Me.

What will you find at Dave and Busters? Well, first and foremost, you will find great food and drink. You will find things like the Carnivore Pizzadillia, which is mixing a quesadilla with a meat lovers pizza, delicious. You could also go for the short-rib & cheesy mac stack, which give you short ribs, mac and cheese in a sandwich. And that is only the start of their menu options.

Secondly, you will find a wide range of drinks, both alcoholic and non-alcoholic. You have things like the Sailors Spiked Root Beer, which is pretty obvious with its name or something delicious like Henny’s Strawberry Nirvana, which involves cognac, passion fruit, mango, blood orange and strawberry Bacardi. To say the least, they are drink masters.

Next up, they have an amazing sports viewing set up. They have a large number of high definition TVs, awesome sound and tune in for all of the major sporting events, so grab your friends and you will be ready to watch.

Finally, is their games. One of the biggest draws is their set-up for games. You have got both electronic or non-electronic. So, if you want to play billiards, skee-ball or bowling, they have you covered. They also can have you covered if you are looking for your arcade games. They have a wide range of games from the classic Pac-Man games to the modern racing games and Dance Dance Revolution games.

There have been a lot of favorite arcade games over the decades, but a few stand out above the rest. They are the biggest and best games of all time. Here are the 10 games that have made the most money of all time. Do you have an idea about what will be on the list. Ready, here we go.

The game that introduced us not only to the gorilla, but also to the plumber who we will all fall in love with. Donkey Kong was made in 1981 and within 1 year it had made almost $300,000,000. That is $300 million, before inflation. After inflation, we are closer to $700 million. It was truly successful.

Created in 1992, this game was one of the most successful of the one on one combat games where you got to face off against a wide range of opponents, each with their own special skills. This is the game that spawned a really unsuccessful movie. Still, the gaming system grossed almost $600 million.

The follow-up sequel to the first game that came out the following year. It brought in a bit more than the first one, with about $600 million. Still, much more successful than its movie, that only made $122 million in the box office.

This classic game came out way back in 1979. It sold a lot more units than a lot of the other systems, with over 100,000 units sold. It managed to rake in over the years around $800 million.

This classic shooter game was one of the hallmarks of the 1980s arcades. It managed to actually break the billion dollar mark for earnings. It was a game that helped revolutionize the gaming industry.

While not the first basketball game, this game that came out in 1993 was one of the most popular sports games that you could find in an arcade. The game brought in a cool $1.1 billion.

This 1981 game came on the footsteps of the Pac-Man game. It was really no different than the original besides the bow. It still had the 256 levels, which were impossible to finish. Still, the game sold a huge 120,000 units and made $1.2 billion. It was a great investment for any arcade.

Champion Edition: Street Fighter, the rival of Mortal Kombat came out in 1992. It sold an amazing 200,000 units and brought in over $2.3 billion. It almost doubled Ms. Pac-Man and crushed Mortal Kombat. It was truly a really popular game.

Are you surprised it wasn’t number 1? This game, released in 1978, and is still popular today. You will find references in it in the 80s classic The Last Star Fighter and many other games. By 1982 it had made $2.7 billion and with inflation you are looking at $6.6 billion. This all from the 360,000 units that were sold.

The original Pac-Man holds onto the number 1 spot. The 1980 system sold 400,000 units, which you can still find online if you want to buy one. It brought in by 1990 $3.5 billion and will forever be a cornerstone in arcade games.

So, after searching up Dave and Busters Near Me, be sure to plug some quarters into these pieces of video game history.