Popeyes Louisiana Kitchen holds a soft spot for those who enjoy a southern fried chicken. If you are hunting for one, you are most likely to find them in Southern States, but with over 2,000 locations, be sure to check you Popeyes Near You Map below. It will show you all of the locations near you.

Once you click on a location, it will bring up the address, phone number and hours of operation. You will also be able to find a link to the company website, where you can checkout their menu. If you are interested, there are also some reviews and with a few clicks you will be able to get directions to be on your way.

Popeyes Near Me – Find it on the Map

Popeyes Near Me – Popeyes Trivia

What makes Popeyes Louisiana Kitchen special? We all know KFC, but what is it about Popeyes that has given it its success? Popeyes chicken is aimed at those who want to enjoy truly Louisiana Style fried chicken, which means it has got a kick. The chicken is crunchy and has a nice Cajun style and offered in different degrees of spice. So, if you like your chicken to make you want to sweat a little, Popeyes is there for you. 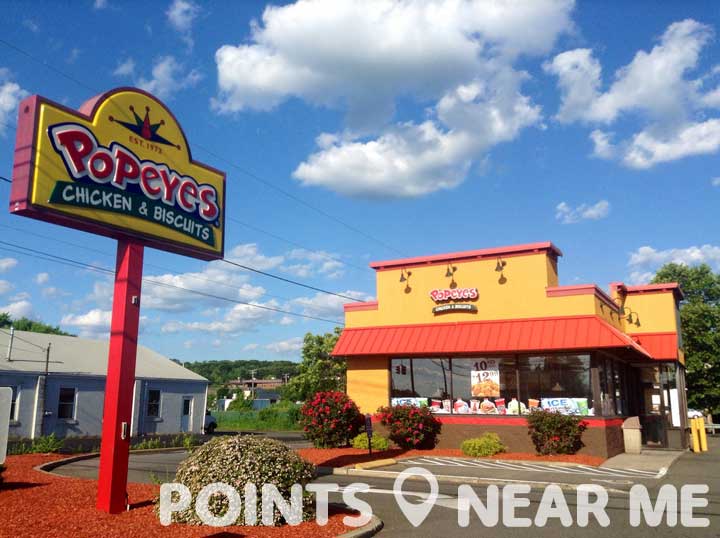 Popeyes Louisiana Kitchen has gone through a number of different names but since 1972 it has maintained “Popeyes” as the distinctive part of its name.

A Bit of History

Popeyes Louisiana Kitchen was not the original name of the company and they didn’t normally sell Cajun style chicken. At first, the company went by the name of “Chicken On the Run” and it was created, in 1972, by Al Copeland. The original restaurant was much closer to KFC offering a mild style fried chicken; however, that business obviously didn’t succeed. So, the restaurant was reopened under Popeyes and started offering a spicy fried chicken recipe that proved much more successful.
By 1976, Copeland started to franchise his restaurant and within 10 years it had expanded to over 500 locations, mostly in the southern states. The company was growing strong until the 1990s. In 1990 the company was having trouble with paying over 300 million dollars in debt and had to file for bankruptcy protection. In 1992 Popeyes Louisiana Kitchen was placed under the control of the newly created America’s Favorite Chicken Company, Inc. This new parent company was created by the creditors who had held the debts of Popeye’s. Copeland and later his estate maintained control over the seasonings, spices and recipes that were used to create the chicken under a third company, Diversified Foods & Seasonings. Copeland’s company would continue to sell the spices and seasonings to Popeyes and continues to do so today.

Popeyes has expanded pretty well within the United States. There are about 1500 locations throughout the United States, so when you search Popeyes Near Me, you are bound to find one; however, if you are not in the south, there might be a bit of a drive. Outside of the United States, you can also find several in Canada and other countries. You can even find locations in Japan and Germany; however, many international locations are found on military bases, so civilians wont be able to enjoy the southern fried chicken there.

While Louisiana Fried Chicken is the main food option, you can get it as regular chicken or as chicken tenders (strips). They also offer a seafood selection. You can get popcorn shrimp, butterfly shrimp and Cajun fish. Don’t worry, that popcorn shrimp on the French baguette will still have the Louisiana spices that you love, it will just be Louisiana style seafood sandwich instead of a chicken one.

Popeyes Near Me – Popeyes Facts

Here are some fun and delicious facts about Popeyes Louisiana Kitchen and its founder Al Copeland.

1. The restaurant had a really bad start. It seems that mild chicken just wasn’t enough to cut it in the New Orleans area. Copeland’s first restaurant, “Chicken on the Run” offered a mild chicken recipe but did so poorly he had to restart his company under Popeyes where his spicier version was much better received.

2. Popeyes Louisiana Kitchen initially had nothing to do with Popeye the cartoon Sailor. The name Popeyes, according to Copeland, was named after a detective, Jimmy “Popeye” Doyle from the movie The French Connection. It was only after the restaurant got started that they used the shared name to bank on by paying for the rights to use Popeye the Sailor in their advertising; however, since 2006 the restaurant has terminated that relationship and the company once again is distancing itself from the sailor.

4. What is in a name? Well, it seems that the name of Popeyes Louisiana Kitchen is not the only name the restaurant has had. Well, sure, we already have mentioned “Chicken on the Run”, but that isn’t the only other name the place has gone by. Since switching to Popeyes the chain has tried out, in no particular order, Mighty Good Fried Chicken, Popeyes Famous Fried Chicken, Popeyes Chicken & Biscuits, and all the way back to Popeyes Louisiana Kitchen. While the chain seems to love the name Popeyes, they can’t seem to settle on the rest of the name. Maybe they will try something else next.

5. Popeyes didn’t even own their own chicken recipe. Between the selling of the company in 1992 to settle the debts incurred and 2014, Popeyes had to license the recipe and seasoning rights from Copeland and later his estates. During those 22 years, Popeyes and its parent company America’s Favorite Chicken Company Ltd. Didn’t own the original recipe used to cook the chicken they sold. In 2014 the company purchased the recipe outright for a little more than $40 million.

6. As of today, Popeyes Louisiana Chicken can be found in 26 different countries. Sure, many locations are found on military bases, but even if you are a civilian, if you enjoy traveling, there is a good chance that when you search Popeyes Near Me, you will be able to find some good southern fried chicken to enjoy.