Five Guys Near Me

When it comes to burgers and fries, Five Guys is the place to go for fresh juicy burgers, hand cut fries, and overwhelmingly delicious hot dogs. As one of the fastest growing franchises in the United States, Five Guys doesn’t even advertise or spend money on marketing. Still, individuals show up in droves to every location, looking to get their hands on America’s finest fast food burger.

Are you interested in finding a Five guys near you? Simply browse Five Guys near me on the map below and find a Five Guys location in your area. Need a bit more information on Five Guys? Read on for interesting facts and trivia on this burger chain.

Five Guys Near Me – Find it on the Map

True or false: The original funding for Five Guys came from a college savings account.

This is 100% true. Five Guys had approximately $70,000 in initial startup funds. The money was meant to pay for the college tuition of Jerry and Janie Murrell’s four sons. Sensing that their oldest children were feeling a bit of trepidation in heading off to school, the pair offered their kids an alternative in 1986. Rather than using the tuition money for school, the Murrell’s suggested using the money to launch a family burger joint. Jerry Murrell, who now heads Five Guys as the CEO, said he was more interested in keeping his familiar together than producing scholars. Knowing that his kids weren’t really the academic type and loving to keep his family close, the pair opened their first Five Guys location in Arlington, VA in 1986. 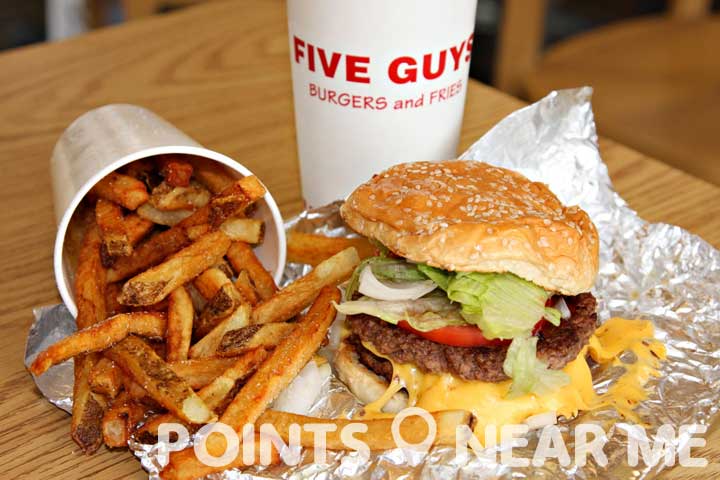 True or false: There are six guys not five.

While searching Five Guys near me, you may be wondering just who the name of this restaurant is in reference to. Well the name initially referred to Jerry Murrell and his four sons (the five guys)- Jim, Chad, Matt, and Ben. All was well with the name until a year after opening the first location, a fifth son named Tyler was born into the family. No longer were their five guys, but six. Because of this Jerry Murrell now says that the Five Guys name no longer includes him, it is a direct reference to his sons.

True or false: Five Guys once refused to deliver to the Pentagon.

Five Guys doesn’t deliver anywhere. Not now and not ever. It’s been a steadfast rule at the business since it opened its doors in 1986. This didn’t stop the Pentagon from trying. A few years ago Pentagon officials called in a 15 burger order to Five Guys, expecting the food to be delivered. The staff responded to the request by explaining that the restaurant didn’t deliver. CEO Jerry Murrell received a frantic phone call from the Pentagon contesting what they believed was an archaic restaurant policy. Because of this, Five Guys took great steps to ensure that everyone knew about its “no delivery” position. If you’re searching Five Guys near me hoping for delivery, you might want to rethink your plans!

That’s right Shaquille O’Neal, basketball legend, and Odor Eaters spokesperson, owns a whopping 155 Five Guys locations throughout the US. In 2013, the former NBA player told an NCAA convention crowd that one of his major investments included 155 Five Guys locations. That’s 10% of all franchise locations! Consider this while searching Five Guys near me and let your mind be completely blown!

While searching Five Guys near me, consider the secret hack menu-but only if you like cheese. According to insiders this is the main component of the Five Guys secret menu. While all Five Guys locations boast the ability to build a custom burger or hot dog, some locations offer double grilled cheeseburgers and cheese fries. Neither of which can be found on the standard menu. While some locations are willing to put these items together fo your, other locations won’t honor the secret menu. The real key is to make all of your cheesy Five Guys dreams come true by ordering the components separate. It may cost more, but it’d be worth every penny.

Like any major culinary establishment, Five Guys boasts kitchen rules unique to their own franchise. What are some of Five Guys major kitchen rules? No timers in the kitchen, as a good cook will know when food is done the right way. French fries must be shaken 15 times exactly to remove excess grease. Onion and bacon must always go below the patty while pickles and tomatoes always go above the patty. And of course, always be generous with the fries.

The Fastest Fast Food Expansion Ever

Every fast food chain has enjoyed its rapid rise to the top, but few chains have grown as quickly as Five Guys Burgers and Fries. Within one year of offering franchises to interested owners in 2003, more than 300 franchise locations had been spoken for. By 2012, more than 1,000 Five Guys franchise locations had been opened throughout the US. With fresh ingredients, killer customer service, and low prices; it’s no wonder Five Guys has wormed its way into the hearts of hungry Americans all over.